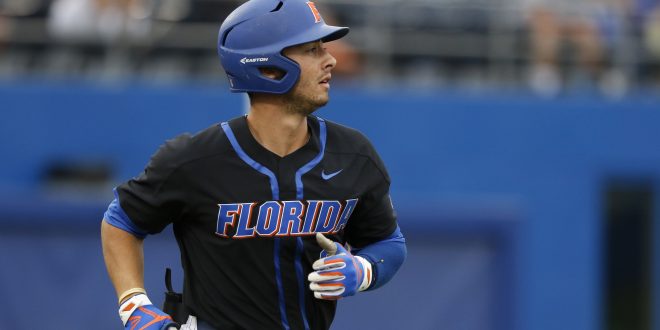 Jonathan India during the Gators' game against the Rams on Saturday, March 10, 2018 at McKethan Stadium in Gainesville, FL / UAA Communications photo by Allison Curry

The Florida Gators (18-4, 2-1) are back in Gainesville and will host the Jacksonville Dolphins (13-8) in a mid-week contest. Kevin O’Sullivan’s bunch are fresh off their first SEC series of the year and have won five of their last six games.

Florida has four more wins this season through 22 games than they had in 2017. That’s thanks in large part to an offense that has produced at a frantic pace. Of Gator hitters with more than 10 at-bats, six have an average over .300.

Leading the way of late is junior Jonathan India. He’s hitting .400 this season and has been on a tear over his last seven games. During the span, he has at least two hits in each contest and 8 RBI. The preseason All-SEC third baseman isn’t just hitting for average. He’s already hit eight home runs. That’s two more than his previous season-high of six in 2017.

Collectively, the Gators are averaging 1.5 home runs per game (7th in the nation). Sophomore Wil Dalton has eight home runs of his own, three of which came against South Carolina over the weekend, and a team-high 21 RBI. The Gators have seven hitters with double digit RBI this season.

Jacksonville is led by head coach Chris Hayes. He’s in his second season as head coach of the Dolphins. His team beat USF earlier this season and is fresh off a sweep of Fairfield but they’re just 2-4 away from home.

At the plate, Jacksonville has four players with 10+ RBI. A trio of sophomores have made major contributions for the Dolphins. Scott Dubrule has a team-high 27 hits, Jacob Southern leads the team with 15 RBI, and Ruben Someillan is hitting .338.

The game will be broadcast on TV on SEC Network+. Severe wind and rain will be a possibility throughout the night so there is a possibility of rescheduling or a delay.

Latest from @NWSJacksonville on timing and severity of today’s storms. Important to remember that today’s cells will be moving or developing VERY quickly, leaving less time to make good decisions. #flwx pic.twitter.com/aDYiwq8Ewv