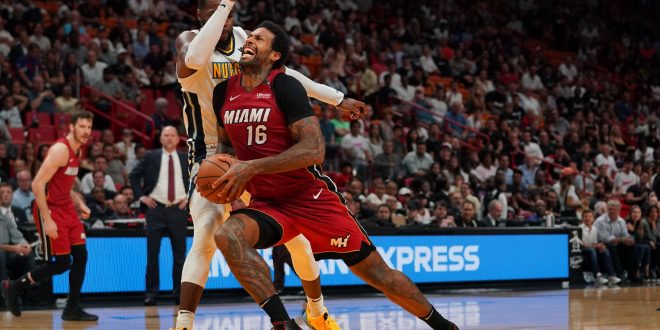 Heat Inch Closer to Playoffs with 2OT Defeat over Nuggets

It’s been a season of close games for the Miami Heat, and Monday’s double overtime win against the Denver Nuggets was no exception.

The Heat were without Dwayne Wade, who was missing his fourth consecutive game with a mild left hamstring strain. Hassan Whiteside also didn’t play, missing his fifth consecutive game with left hip pain. The Nuggets had the largest lead of the night after 3.5 minutes with a 16-5 lead. After that the score stayed within double digit leads on both sides until the end after 22 lead changes.  It wasn’t until the second OT when the Heat outscored the Nuggets thanks to James Johnson. Johnson put up 10 of his career-high 31 points in the 2nd overtime period. Also for Miami, Kelly Olynyk had 30 points off the bench and Wayne Ellington contributed 23.

It was Miami’s 48th clutch game of this season, leaving their 5-pt margin rate in the final five minutes at 68%. Miami also scored 20 of their 36 three-pointers. That number of threes is their season high and just shy of the franchise record set last season. It was also the Heat’s highest scoring game in team history. It was even enough to crash the NBA’s stat system during overtime with no official box score released as of midnight.

Looking Ahead to the Playoffs

Heat fans can breathe a little easier with Monday’s game bringing their record to 38-33 and moving them up to seventh in the Eastern Conference, one half game in front of the No. 8 Milwaukee Bucks. The Miami Heat will continue to honor the 17 victims of the Parkland in their 11 games left in the regular season. Next up, the Miami Heat will host the New York Knicks on Wednesday, March 21.

Previous Preview: No. 2 Florida Baseball Hosts Jacksonville
Next NCAA Women’s Basketball Sweet Sixteen, all No. 1’s are in