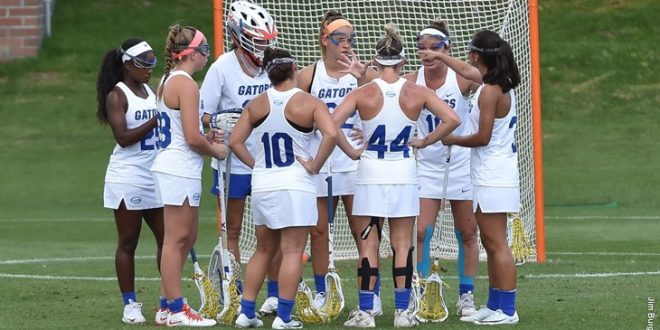 Gators Lacrosse plays Towson University tonight in their final non-conference game of the regular season. The Gators played their first Big East conference matchup on Sunday when they beat Vanderbilt 11-10 on the road. Florida begins their Big East campaign 1-0. The Gators are currently 6-2 on the season with their only loses coming from top competition: No. 8 Clemson and No. 1 Maryland. They will have a tough matchup tonight when they face Towson. Towson is ranked No. 14 in the country currently, but dropped their last matchup to No. 1 Stony Brook 13-8. Both Florida and Towson’s rosters are loaded with talent.

The Gators entered the season with four players on the Tewaaraton Award watch list. Midfield- Sydney Pirreca (Jr.), Attack- Shayna Pirreca (Sr.), Goalie- Haley Hicklen (Sr.), and Attack- Lindsey Ronbeck (Jr.) all made the list for the Gators. Towson also had a player make the list: Defenseman- Olivia Conti (So.). The gators will relay on their stars to create scoring opportunities, but will depend on Hicklen to get the job done in the net. Towson is a very competitive team, and is capable of taking down any team in the country. The Tigers are hoping to play better than they did on Sunday.

Florida will be wearing their new orange alternates tonight. The team will also be handing out T-shirt replicas of the alternate uniforms before the game at Dizney.