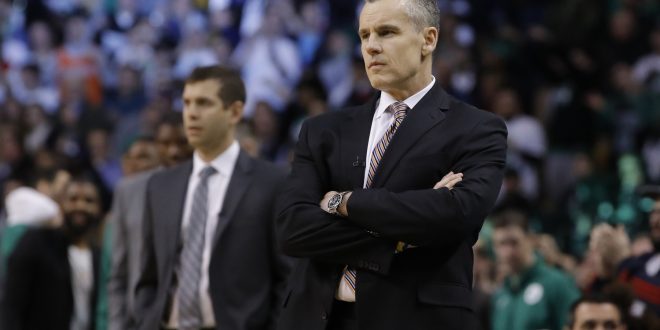 At the beginning of the season, the Oklahoma City Thunder had what some would refer to as a dull start. The Thunder were 14-15 back in December at the start of the season. Even after losing Durant, former Gator great coach Billy Donovan has made a new game plan this year and has turned the current team’s season around since then.

OKC is sitting at a 43-30 record and are ranked 4th in the NBA Western Conference. They have a home record of 25-11 and an away record of 18-19. After the Thunder’s December loss to the New York Knicks, the team took their 14-15 record and then went on to win six games in a row. They have had one 8-game win streak back in January and their second 6-game win streak just ended last night losing to the Celtics 100-99.

Westbrook has been with the Thunder for his entire NBA career and this season he continues to lead the team on the court in points per game. He is currently averaging 25.4 points a game and has a season total so far of 1,801 points.

Anthony came up short with his two previous teams, the Denver Nuggets and the New York Knicks. But going into his rookie season this year with the Thunder, he hasn’t disappointed. Anthony is averaging 16.6 points per game and has a 76 percent free-throw percentage for this season.

George has averaged more minutes per game than both Westbrook and Anthony. He is averaging 36.4 minutes and also has an 81 percent free-throw average on the season. Back in January Anthony was named as a replacement for injured DeMarcus Cousins for the 2018 NBA All-Star Game.

As the team finishes up the regular season and approaches the playoffs, George has said that the Thunder are now just taking it one game at a time.

The Thunder have 9 games left until the playoffs. Next up, they will take on the Miami Heat at home on Friday. Tip-off is scheduled for 8 p.m.

Junior studying telecommunications- news at the University of Florida. Multimedia Sports Reporter for ESPN Gainesville as well as a Multimedia Journalist for WUFT News.
@acheney21
Previous Penny Hardaway Takes Over Memphis Tigers
Next Lacrosse – No. 6 Gators host No. 14 Towson