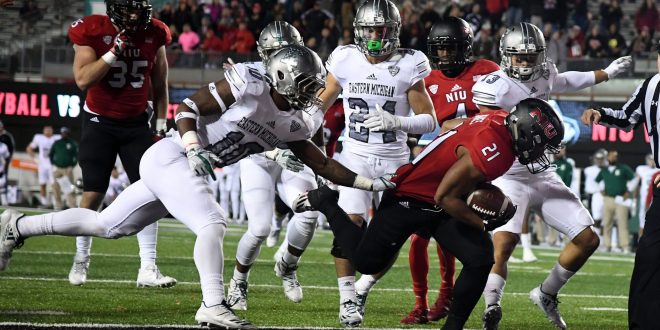 Men’s swimming and diving, softball, women’s tennis and wrestling were all discontinued at EMU in an effort to make up from a $4.5 million to $5.5 million budget deficit.

EMU previously led the Mid-American Conference with 21 total sports programs will now have 17.

Although only one male sport was cut, female sports still outnumber male sports 10 to 7. As part of the cuts, 42 positions within those sports are being terminated and 17 other people are going to be laid off.

Not only will people be losing their jobs but over 80 student-athletes will be affected as a result of the cuts. If the students choose to stay at the university, the school will honor their scholarships until they graduate. If they choose to transfer, the NCAA will not make them sit out a year.

EMU has drawn a lot of criticism after it cut four sports program yet the football program was left unblemished.

EMU football has the worst attendance of any Division One school, spends about $6 million on football funding while only making $600,000 back, and hasn’t had a winning season since 1987. But yeah, let’s cut wrestling #SaveEMUWrestling

Eastern Michigan’s athletic director, Scott Wetherbee, said Tuesday that the university has more than $6 million in expenses for football. One argument against the football program is for the school to drop out of division one football.

EMU has a history of discontinuing it’s sports programs.

In 1988, men’s gymnastics and women’s field hockey were cut. More recently in 2000, both the men’s tennis and soccer were cut while women’s rowing was added.

Previous Lacrosse – No. 6 Gators host No. 14 Towson
Next Richard Sherman Moving On From the Seattle Seahawks