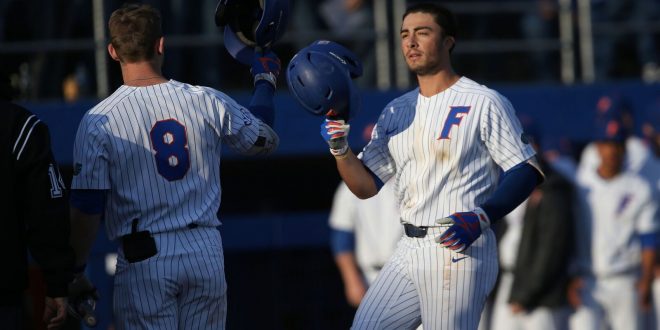 A day after the original baseball game between Florida and Jacksonville was postponed due to inclement weather, the Gators took care of business at home winning 10-3 on Wednesday night.  With wind gusting out at McKethan Stadium, Florida took advantage as J.J Schwarz, Wil Dalton and Blake Reese all homered.

Freshman Hunter McMullen got the starting nod on the mound for the Gators and took care of business.  He threw three scoreless innings while giving up four hits and walking one batter; his Jacksonville counterpart did not fare as well as starting pitcher Spencer Stockton gave up six earned runs, four of them coming from home runs in five innings of work.

The game had the looks of a pitchers duel through three and a half innings as the game remained scoreless but Florida would score seven runs in the next three innings to break the game open.

Schwarz homered on a 0-2 pitch, his sixth of the year, to give the Gators the lead in the fourth inning. Nick Horvath also collected an RBI single in the inning, extending the Florida lead to 2-0.  Horvath had a fantastic overall game on Tuesday night as he contributed both offensively and defensively. Not only did he go 2 for 4 with an RBI but he also made two great catches in center field.

The Gators erased all doubt in the fifth inning as they scored four runs. Dalton hit his team-leading ninth home run of the season. After a Deacon Liput RBI sacrifice fly, Blake Reese hit a two-run home run making it 6-0. Liput would go on to have a 4 for 4 night improving his batting average from .161 to .253.

No wind assistance needed on this #BlakeBomb

Florida would score four more runs from that point on. Jacksonville would score three runs in the seventh inning as Tommy Mace struggled to put batters away. JU would not get any closer going scoreless in the final two innings.

Gator coach Kevin O’Sullivan isn’t surprised by Deacon Liput’s 4 for 4 performance as the coach continues to put him in the middle of the order.

Liput says that from all four of his hits tonight, it was the bunt single that made him feel that he was in a groove. The shortstop credits the increase in power this year compared to last year’s to the the change in mind set.

Video evidence of #DaltonDinger number 9, which was LAUNCHED

O’Sullivan originally did not want to start Horvath in center on Wednesday night as he was supposed to pitch but the windy conditions forced his hand.

The Gators now hold a 19-4 overall record and look to continue their success in their SEC home opener against the Arkansas. The fourth ranked Razorbacks lost their midweek match-up against Charlotte on Wednesday night.

Arkansas is off to an an impressive start to the season as they have a 16-4 record on the year and are sitting atop the SEC Western Division with a perfect 3-0 conference record.

First pitch from McKethan is at 6 p.m. and will be televised on SEC Network+. A live radio broadcast could be heard on ESPN 98.1 FM & 850 AM WRUF.

Time to turn the focus to the weekend, big matchup coming with No. 4 Arkansas. pic.twitter.com/bMCDMVuehr

Previous New Football League Announced for 2019
Next No. 6 Gator Lacrosse Falls At Home To No. 14 Towson Tigers