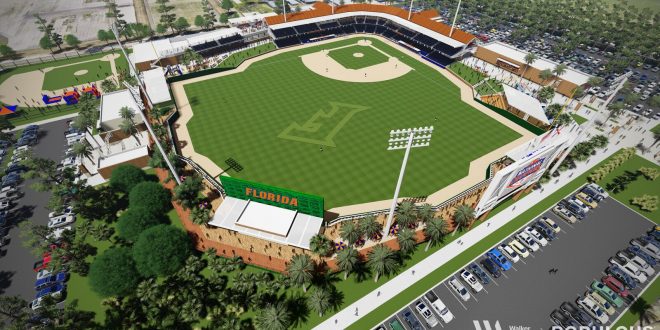 After months of discussion, plans have been approved and money allocated to upgrade three facilities on campus in hopes of building future championships for each respective sport. The announcement was made by the University Athletic Association on Friday.

The UAA announced major upgrades to the home of Florida Gator softball, the construction of a brand new baseball stadium, and the long-awaited construction of a stand-alone football complex. The $130 million project provides upgrades to each sport’s facility. This is the second phase of the athletic department’s three phase plan. The goal is to make the University of Florida the premier place for top-notch athletic facilities in the country.

Out With the Old and In With the New

Deciding where these facilities would go took some time.  When the football team gained access to the Indoor Practice Facility in 2015, the location of a potential stand-alone football complex became a puzzling issue. There wasn’t enough land in the area to construct a state of the art complex comparable with other schools around the country.

To solve this issue, the complex had to push out a staple of Gator athletics since 1988. McKethan Stadium will be torn down following the 2019 season. This will make room for the new football complex. Florida’s home diamond is relocating to the southwest part of campus on Hull Road. This means baseball will have lacrosse and softball as its new neighbors.

In a press release from the UAA, Stricklin said the construction timeline for these two projects will change. According to Stricklin, “Baseball will need to be built first, which allows us to re-purpose the current baseball site and put the stand-alone football complex in that space.”

The new baseball stadium is the first new stadium on campus since Dizney Stadium opened its doors in 2008. The new ballpark attempts to make the fan experience more comfortable, especially on those humid Sunday afternoon game days. When the stadium opens, the field will face the northeast, which puts the sun behind home plate. The stadium design provides shade to most of the expected 5,000 chairback seats. The ballpark will have open concourses to allow fans to keep their eyes on the field. The new diamond will have an increased capacity of 10,000 and have multiple social areas.

Sticklin said the goal was to adapt to the changing social aspects of baseball with this new park.

The Wait Is Over

The Florida football fanatics have been clamoring for this addition for years. Now, they finally got what they have been asking for. The second phase of the renovations includes the construction of a stand-alone football complex. The facility will host many of the day-to-day operations of the Florida football program. It will house the team’s locker room, meeting area, weight room and offices for coaches. Also included in this facility will be spaces for coaches and players to meet. This will help establish a welcoming space for current players and future Gators alike.

Stricklin described what this stand-alone complex will do for Gator football.

The softball program will receive a facelift to its 22-year-old stadium. The new features to Pressly Stadium are similar to the ones that will appear at the neighboring baseball stadium. The upgraded Pressly Stadium features 360-degree open concourses to allow fans to enjoy every second of the action. The stadium’s capacity will rise from 1,431 to a total of 2,800. All the seating in the stadium will be chair backs. The $11 million project features the addition of non-traditional seating spaces to add a social aspect to the trip to the softball diamond.

Previous Preview: Syracuse vs Duke For Spot in Elite Eight
Next SEC Preview: No. 6 Gator Softball Hosts No. 8 Texas A&M