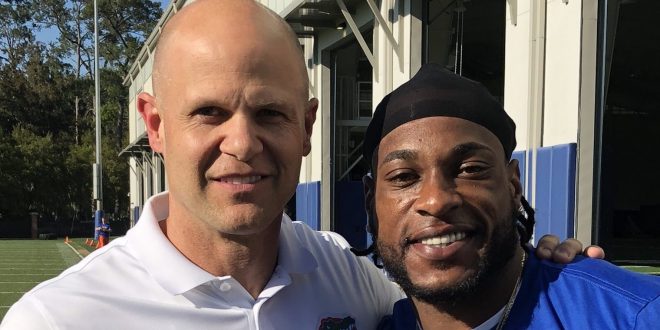 Danny Wuerffel is making headlines again, and yes, it does involve football. Flag football that is. This NFL off season has been huge for other football-related organizations to appear in the mainstream media world.

The XFL is making a huge comeback after a 20-year hiatus, a kick-off-less football league named the Alliance of American Football will kick off in 2019, and now a new league that will air live on NFL Network this upcoming Summer has come into the picture.

The American Flag Football League, or better known as “The US Open of Football,” will feature a ton of celebrity ex-NFL and college players throughout an 11-game span that will be nationally televised. The league will feature a 128-team tournament that will eventually put the best in a “pros bracket” made up of four teams with elite ex-professional athletes.

Thanks to everyone who came out for @GatorsFB @FlagFootball tryout.
Can’t wait to finalize our team! #GoGators pic.twitter.com/bQqkzOmIwE

Former Gator quarterback and 1996 Heisman Trophy-winning Danny Wuerffel will be amongst the notable prominent athletes to join the league. He assembled a group of former Gator athletes.

Wuerffel will also be accompanied by other Gator greats like Brandon James, Frankie Hammond, Major Wright, Chris Doering, Travis McGriff, Moses Jenkins and Taylor Jacobs will be an alternate, according to seccountry.com

Furthermore, Wuerffel spoke upon the excitement of being involved in a new league. He’s looking forward to the amazing athletes he’ll get to play alongside with. Even more so, he said that “the competitor came back out of him.”

Percy Harvin has been mentioned in talks and rumors about joining the AFFL. All was said in stone when he showed up to tryouts this past Friday night and participated in workouts with other athletes trying to get their shot.

Harvin mentioned how impressed he was by some no-names who played their hearts out.

Harvin was actually contacted by Michael Vick before he attended the tryouts. According to Harvin, Vick called him and tried to recruit him to play for him.

But, when Chris Doering gave him a call about the team Wuerffel was implementing, Harvin decided to deny Vick altogether and make an appearance in Gainesville after all.

Flag Pulling Is The New Wave

Wuerffel will be quarterbacking the team, of course. But with it being flag football, he’ll have less to worry about is that there’s no pass rush. With Wuerffell being 43 years old, that’s a real perk for him. But he didn’t have much interest in playing football on a shortened field or with wacky rules, either.

“I think the switch for me was when I recognized … it’s not on a narrow field,” Wuerffel said. “It’s on a full 100-yard by 53-yard field and the concepts of it, for the most part, they can’t rush, it’s a 4-second clock so you have time to think and throw,” according to 247sports.com.

Although the AFFL falls under the same category as traditional football, the game is played rather differently. Wuerffel mentioned how important the defensive scheme had to be with flag pulling.

Under the Radar Stats

For a 43-year old Wuerffel, returning to the football field at this age is not only an amazing feat, but also because of his past diagnosis.

He was medically diagnosed with Guillain Barre-syndrome back in 2011. It’s a rare disorder that causes the body’s immune system to attack part of the peripheral nervous system, making it harder for the movement of limbs. This syndrome affects one in 100,000 people.

Wuerffel is healthy now, and excited to be apart of this new opportunity to play competitive football again.

Recent grad from the University of Florida. Editing all articles on here while helping out the newbies. Love all things basketball.
@@MarcoJMartinez_
Previous Women’s Hoops Preview: UConn vs. South Carolina
Next No. 6 Florida Softball Sweeps No. 8 Texas A&M