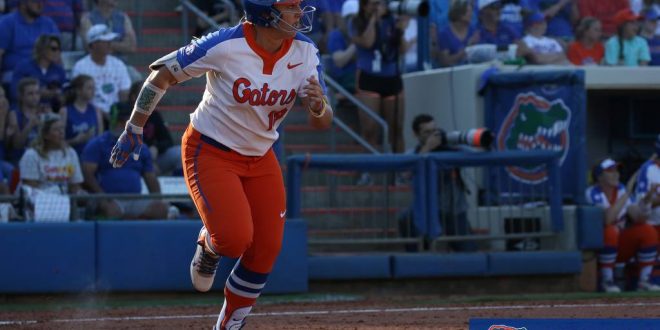 The game started similar to the others this series, with Florida scoring a total of four runs in the first inning and jumping out to an early lead.  Three of the runs scored on RBI walks by Florida hitters as the Gators took advantage of the wildness of Aggies pitcher Lexi Smith.  The Aggies made their first pitching change after these runs as Smith was replaced in the circle by Emily Harrington.  Harrington saw some time in Sunday’s game when she was brought in to relieve pitcher Kayla Poynter.  She gave up an RBI single to Sophia Reynoso to complete the scoring in the inning.

That's all the scoring for the #Gators in the first as Florida takes a 4-0 lead over Texas A&M. There was only one hit in the inning and six walks.

The Aggies got on the board at the top of the fourth inning on a solo home run by Samantha Show but the Gators responded in the bottom of the inning as Jordan Matthews hit a single that plated Amanda Lorenz and Nicole DeWitt to give Florida a 6-1 lead.

Jordan Matthews with a nice 2 RBI single. Gators are up 6-1 going into the 5th inning. #softball #Gators

Texas A&M reduced their deficit in the fifth to 6-3 thanks to a two RBI single by Show, allowing Tori Vidales and Kaitlyn Alderink to score.

In the sixth inning, Janell Wheaton was hit by a pitch with the bases loaded and the Gators plated another run.  In the circle Florida put in Aleshia Ocasio for Kelly Barnhill in the seventh inning and the Aggies were retired, preserving the Gator win.

Gator coach Tim Walton said he felt pretty good about this series as a whole. He said he thought the team played hard and it only will get as tough or tougher from here as they play other top 10 conference teams. He also said he thought Barnhill pitched a pretty good game.

Matthews, a leader tonight with three RBI, said she thought the team played well. But, her secret to how she keeps calm on the plate? Well, it’s all in her head.

The Gators have a double-header with FIU on Wednesday night at 4 p.m. and 6 p.m.

Courtney Mims is a junior telecommunications major at the University of Florida. She enjoys covering all Gator sports and drinking gallons of Starbucks coffee while doing so.
Previous Wuerffel, to Captain in American Flag Football League, Recruits Percy Harvin
Next 76ers’ Markelle Fultz Returns In Game Against the Denver Nuggets