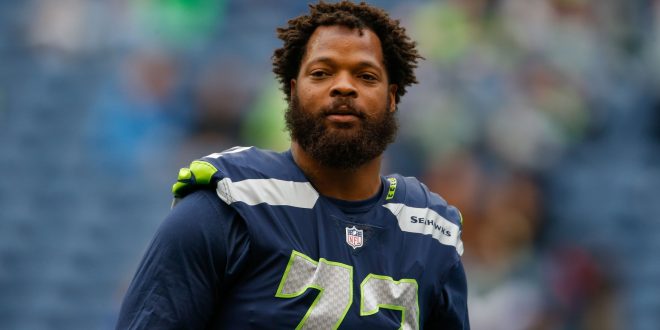 Eagles DE Michael Bennett Turns Himself in on Felony Charge

Michael Bennett turned himself into Texas police on Monday for a felony charge of injury to the elderly. A Harris County grand jury indicted he Philadelphia Eagles newly-acquired defensive end Friday. The incident allegedly occurred at Super Bowl 51 at the NRG Stadium in Houston, where Bennett was watching his brother Martellus play for the New England Patriots. Prosecutors say Bennett shoved past a 66-year-old paraplegic security worker in a rush to get to the field. The charge carries up to 10 years in prison and a $10,000 fine. Bennett posted $10,000 bond and can travel between Houston and his home in Hawaii.

.. Just now: @Eagles player Michael Bennett escorted from courtroom to elevator in handcuffs. I’ll have latest from down here on #khou11 at 4,5, + 6 pic.twitter.com/hv9Xydlt34

Bennett’s sister, Ashley Bennett, recorded the two of them charging onto the field after the Super Bowl on February 5, 2017. The video is clearly is inconsistent but does not show the alleged incident.

This video doesn’t show the alleged felony committed by Michael Bennett but it does show his sister, Ashley Bennett, *did* record herself and her brother running onto the field after the 2017 Super Bowl. https://t.co/UKyUTNiAZa pic.twitter.com/ZOPfYDzD03

The 32-year-old attended high school in Houston before playing college football at Texas A&M University. Bennett signed as an undrafted free agent with the Seattle Seahawks in April of 2009. Then, the Seahawks waived Bennett later that year in October. Bennett was then claimed off waivers by the Tampa Bay Buccaneers. He would eventually return to Seattle in 2013 signing a one-year $4.8 million contract. In March 2014, he resigned a four-year $28.5 million contract  and extended with a three-year $31.5 million contract extension in December 2016. His career as a Seahawk made him a 2014 Super Bowl champion and earned him 3 Pro Bowl Invites.

On March 14, 2018, the Seahawks officiated a trade deal that sent Bennet and a seventh round pick in the 2018 draft to the Eagles. In exchange the Eagles sebt WR Marcus Johnson and a fifth round draft pick. Howie Roseman, executive VP for the Eagles, said he was not made aware of Bennett’s situation until Friday but does not think the Seahawks are at any fault in the trade-situation.

Previous Odell Beckham Jr. threatening to hold out
Next Are the Seattle Seahawks rebuilding or retooling