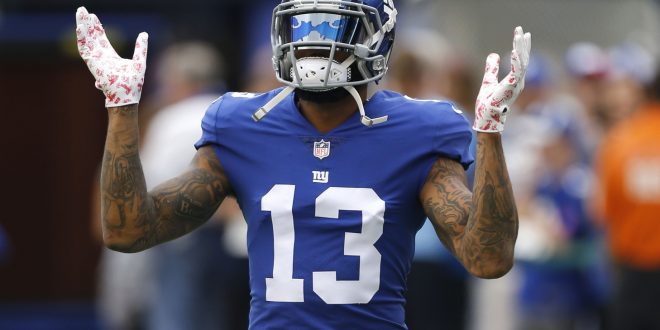 Odell Beckham Jr.’s future is up in the air.

The current understanding of the New York Giants wide receiver debacle is that he will not set foot on the field without a new contract extension with the Giants or any other team.

The news came a day after Giants owner John Mara said no one is “untouchable” in trade talks.

OBJ made headlines earlier this month when a video of him in bed with a woman who appeared to be fixing up lines of white powder on a tray had found its way online.

With the Giants being 3-13 last season and the video of Beckham surfacing, anyone on the team, including Beckham, isn’t safe from being traded.

His past with the Giants

Drafted in 2014 from LSU as a round 1 pick at number 12 by the Giants, Beckham’s future showed greatest in the NFL.

At the beginning of his career, Beckham broke records as a rookie, including the first and only rookie in NFL history with at least 50 receptions at home and the only rookie with five games of 90-or-more yards in a single month.

Within two years, OBJ became the Giants star player known for his touchdown celebrations on the field. In addition, his notorious behavior on-and-off the field that many have criticized over and over.

Last season, Beckham fractured his left ankle in Week 5 against the Los Angeles Chargers. His 2017 season saw a quick end after undergoing surgery and being placed on injured reserve.

No one really knows what will happen with the star player.

Giants and NFL fans will just have to wait and see what happens in the end.

If it is any reassurance, Tisch says that the rumors about OBJ are background noise.

I am a fifth-year journalism major, specializing in sports and media. My favorite sport to watch and cover are college and NFL football. When I'm not doing that, I enjoy hanging out with my cat, going to concerts and traveling.
@sportsabrina
Previous 76ers’ Markelle Fultz Returns In Game Against the Denver Nuggets
Next Eagles DE Michael Bennett Turns Himself in on Felony Charge