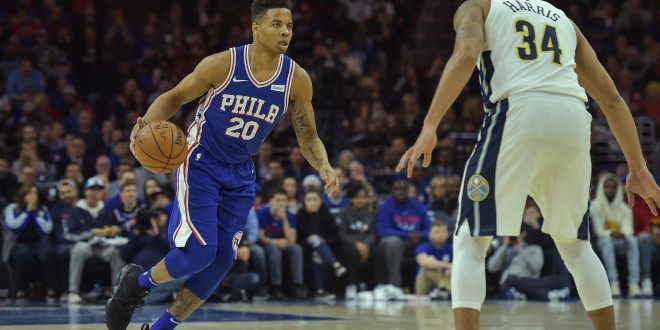 76ers’ Markelle Fultz Returns In Game Against the Denver Nuggets

No. 1 pick for the Philadelphia 76ers’, Markelle Fultz, saw action for the first time last night since October. Finally cleared to return from a 68-game absence due to a shoulder injury, Fultz was welcomed by a crowd cheering his name.  The 76ers’ defeated the Denver Nuggets 123-104.

Fultz’s return definitely didn’t go unnoticed. Fultz said he could hear the crowd chanting, “Fultz, Fultz, Fultz!” as they gave him a standing ovation upon entering the game.

Fultz played for 14 minutes and secured 10 points, eight assists and four rebounds for the 76ers’.

Fultz averaged 6 points per game and shot just 33.3 percent from the field before his injury. Now the 19-year-old is back and motivated to bring his team wins.

Fultz says he was determined to help his team come out with a victory rather than focusing on his play.

And fans from all over were excited to see Fultz back as well.

Markelle Fultz is back and the world is a better place.

Sometimes when you haven't seen a player in a while, you forget something fundamental about they look. With Fultz, it was, holy cow is that dude FAST. The jumpers at the end were great. DEN defense continues to be not good enough.

And now the fans have repurposed the "SKOL" chant once again, this time with Fultz's name. What a city

The Sixers 123-104 win against the Nuggets secured themselves a spot in the playoffs; this is the first time since 2012.

76ers’ Joel Embiid had 20 points and 13 rebounds for Philadelphia, while Ben Simmons had 11 assists.

Denver’s Will Barton led the Nuggets with 25 points. However, Barton only scored fifteen points in the third quarter and blew an eight-point halftime lead.

Denver’s Jamal Murray had 17 points and Paul Millsap finished with a total of 16.

Up next, the Nuggets visit Toronto to take on the Raptors on Tuesday.

Meanwhile, the Sixers’ will host the New York Knicks on Wednesday.

Previous No. 6 Florida Softball Sweeps No. 8 Texas A&M
Next Odell Beckham Jr. threatening to hold out