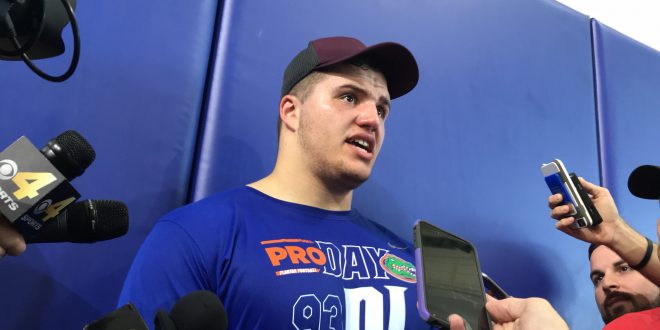 Compared to previous years, there were not as many NFL scouts present at this year’s Pro Day though. The reason for this could be because the Gators only had two players participating in Pro Day who are viewed as potential first-round draft picks. Also, the Miami Hurricanes had their Pro Day on Wednesday. This may have caused scouts to pick to travel to Miami instead of Gainesville.

The 18 players that worked out during Pro Day were:

Defensive tackle Taven Bryan and wide receiver Antonio Callaway are the only two players who worked out during Pro Day that could potentially be drafted in the first round this year.

Bryan is Florida’s top available player for this year’s draft. During pro day, Dallas Cowboys defensive coordinator Rod Marinelli spent a lot of time working out with Bryan and talking to him afterwards. Bryan said the drills he ran with Marinelli went really well and he’s going to continue to practice them.

In his interview with the media after his drills, it was interesting to note that Bryan didn’t grow up watching football. He said he didn’t watch football on Sundays and spent most days fishing and hunting.

Callaway also has the potential to be drafted early on this year. A lot of talk around Callaway during Pro Day had to do with how he has changed since sitting out the whole 2017 season due to an alleged credit card fraud scam.

Callaway says sitting out for a season humbled him.

Callaway says since he has a daughter now he has to make the right decisions and believes it has changed him.

He thinks this change will show on the field as well.

Sydney is a senior studying telecommunications with a specialization in sports media at the University of Florida. She is a multimedia sports reporter for ESPN 98.1 FM/850 AM WRUF and WUFT-TV.
Previous Melrose Shares His Thoughts On Upcoming NHL Playoffs
Next What to do with Dez Bryant?