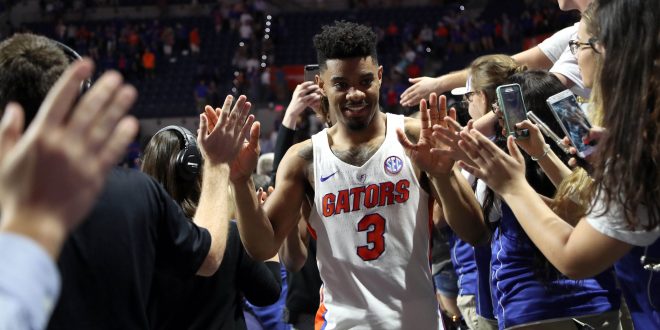 As the Gator basketball season ends, new possible roster changes have come during the offseason. Florida’s Jalen Hudson has stated on Instagram that he will enter the NBA draft.

What does this mean?

Nothing is set in stone yet. Hudson as of now has not hired an agent so he is still eligible to come back and play for the Gators if he decides to withdraw his name from the draft pool. Before 2016, players who declared for the NBA draft while still in college could not come back to play at the college level. However, since rule changes in that year, players can enter the draft and still retain their eligibility if they don’t hire an agent. In Hudson’s case, he has until June 11th to withdraw his name from the draft. This gives him a chance to test the NBA waters. If he’s invited to the NBA draft combine in May, he can participate and receive feedback from scouts. He can remain his college eligibility and return back to school, as long as he doesn’t hire an agent.

Where does Hudson stand?

Hudson, a redshirt junior guard, and transfer from Virginia Tech had to sit out the 2016-17 season, due to NCAA transfer rules.  Hudson averaged 15.5 points per game, shot 45.6 percent from the floor, and 40.4 percent from the 3-point mark this season. He stands at 6’6, at 192 pounds with the size of a decent guard for the league. NBA draft predictions have him at most, as a late second round pick.

Gators in the draft

As of now, Hudson is the only Gator on the current roster to have declared for the draft. An example of a Florida player who took advantage of this new draft rule was former Florida forward Devin Robinson. Robinson left after his junior season in 2016 to enter the draft to test the draft waters. He then withdrew that year from the draft because he got surgery around the time frame of the combine. Because he didn’t sign with an agent, he was able to return to the UF for the 2016-17 college basketball season. Robinson did enter after his junior season and was a predicted late second-round pick, like Hudson. However, Robinson ended up undrafted. He currently plays in the G-league for the Westchester Knicks on a two-way contract with the Washington Wizards. If Hudson enters the draft he will hope to be the first Gator since Erik Murphy in 2013 to get drafted.

Said there was an 80% chance he was leaving for the draft. While this doesn't mean he's officially gone, I'd be shocked if he returns to UF next season. #Gators https://t.co/W0xVZH8z6r

Hudson’s decision comes a day after Florida center John Egbunu stated he wouldn’t be pursuing a medical waiver. It was possible for Egbunu to return for a sixth year for the Gators. He had an ACL tear in the 2016-17 season, which kept him sidelined for all of this 2017-18 season. Along with Egbunu’s departure, Florida will be missing senior Chris Chiozza and Redshirt senior Egor Koulechov, who have both used up all of their eligibility.

If Hudson does leave, that leaves an extra scholarship spot open for an incoming freshman or a transfer player to come in for the Gators. Head Florida basketball coach Mike White has added transfer players to the Gator roster for the past two years. In 2015-16 he added both Hudson from Virginia Tech and Canyon Barry, as a grad transfer who was eligible immediately, from College of Charleston. This most recent season he added Koulechov from Rice University to the roster.