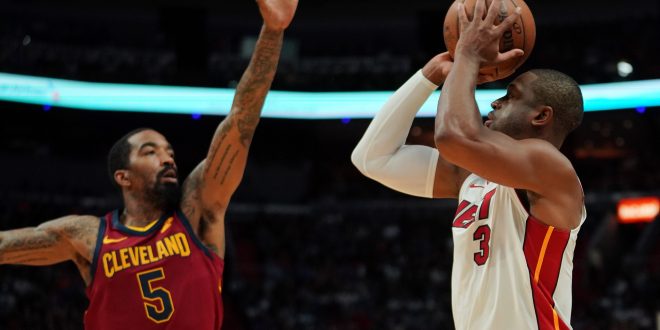 The @MiamiHEAT got on top early and never looked back, topping the @cavs 98-79 in South Beach! #HeatCulture

With the victory, the Heat are now 40-35 and are the 7th seed in the Eastern Conference. They are a half game ahead of the Milwaukee Bucks and 1.5 games behind the Washington Wizards. With seven games left in the regular season, the Heat look primed to play the Toronto Raptors or Boston Celtics in the first round of the playoffs.

The Heat held the Cavaliers to their season-low in points. Their previous season low was 88 points. This offensive dud came at a shocking time for Cleveland. Before Tuesday night’s outcome, the Cavaliers had scored at least 120 points in four straight games and had won five in a row.

Miami held Cleveland to 36.5 percent from the field, including 4-26 (15.4 percent) from beyond the arc. They also forced 15 turnovers and blocked 9 shots on the evening. Wade had four blocks on the evening, with two of them coming against his former teammate and best friend.

Dwyane Wade with the block on LeBron James ❗❗

The Cavaliers also struggled to score because they were without Kevin Love for the entire second half, who took an inadvertent elbow to the face and was said to be experiencing concussion-like symptoms.

Miami outscored Cleveland 54-34 in the first half. James mentioned that their first half struggles affected their rhythm for the entire game.

Stats of the Day

Dwyane Wade and LeBron James have now played 30 total games against each other in their career. They currently each have 15 victories in this head-to-head matchup.

Dwyane Wade and LeBron have now played in 30 games head-to-head.

LeBron is still winless in Miami since leaving the Heat. pic.twitter.com/CYkGFBZvq1

LeBron James has now scored at least 10 points in 865 straight games. He is one game shy of tying Michael Jordan’s record. James will have the opportunity to break this record on Wednesday night in Charlotte, ironically against the team that Jordan owns.