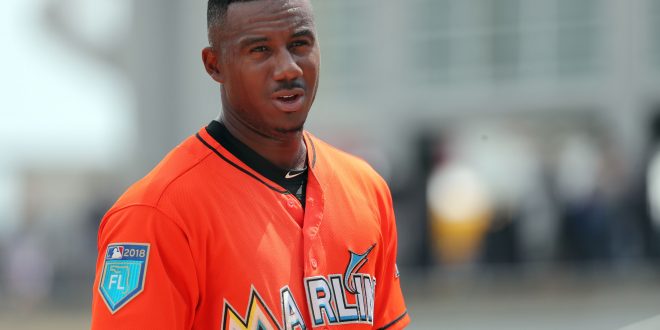 It’s no surprise that the Miami Marlins had a less than desirable season last year. It’s old news, it’s relevant to the challenges that lay ahead for the organization. With new trades, new ownership and the team looking to improve on their 2017 record of 77-85 (.475), second place national league eastern division spot, the fan base is in for an inevitable “growth” period.

The excitement begins with a team and Miami Marlins broadcaster Jessica Baylock has an inside look on that energy here:

New Kid on the Block

Lewis Brinson is one of two players acquired in the Marlins’ offseason trade. On Sunday, it was announced both him and Garrett Cooper made their first opening day rosters.

Brinson, a Coral Springs, Florida, native, has had a successful 2018 spring training season so far. On that stat line, the 23-year-old center fieldsman has logged 58 at bats with 19 hits, eight runs and two home runs. He’s slated to do well in the regular season with a current .586 slugging percentage and .328 batting average.

The longtime Marlins fan is ranked as the No. 1 prospect for the Marlins and the No. 27 prospect in the league. In a couple of years, assuming he’ll stay with the program, the Marlins could really put his talent to the test as one of the headliners to its program.

Brinson is not the only one who has been noticed in spring training. Pitcher Tayron Guerrero is also turning heads.

The Bocachica, Columbia, native only has one win on the stat line for spring training, but in 11.1 innings, he only allowed four hits, one run and run error, striking out three batters along the way.

“He was walking a ton of guys last year. This year he seems to have put it together,” Marlins Manager Don Mattingly said in a “SunSentinel” article. “He’s done some things to his delivery and he’s throwing strikes.”

Chen, the $15.50 million-salary pitcher, will continue to work his way back to the circle as he recovers from an elbow injury that cut his 2017 season short.

The partially torn ligament tear in his throwing elbow, left, has caused major problems for Chen over the last couple of seasons. However, on the final day of spring training, Chen tossed 16 pitches in batting practice and said “his arm felt the best it has in years,” according to an MLB.com report by Joe Frisaro.

Chen’s return to the mound could be the energy the Marlins are looking for in their comeback season. He’s hoping to be fully recovered by May. Chen threw to live hitters for the first time on Sunday but was placed on the 10-day disabled list Tuesday.

Who can forget about Derek Jeter?

It came to a surprise for a lot of people when Derek Jeter expressed interest in co-owning the Marlins. It was even more surprising when the former Yankee was named chief executive officer.

The takeover was pretty quick, but Jeter and other organizers made the moves that needed to be made. Here’s an inside look from Baylock:

In December, Jeter was bombarded at a town hall meeting by about 200 Marlins season-ticket holders who were disappointed in the direction the program was going under Jeter’s leadership. The fans expressed their dismays about major roster stars getting traded away, especially Stanton, and the way the payroll had been slashed.

However, Jeter has been very involved in the South Florida community since taking over the franchise. Baylock gives a deeper look into his involvement here:

Mari Faiello is a second-year journalism student and sports writer for the Alligator. She covers the University of Florida's softball team and has previously covered UF men's tennis, UF women's tennis and UF volleyball. She has worked at the paper since Fall 2017. She has worked at ESPN 98.1 FM - 850 AM WRUF since Spring 2018. Her favorite sports are volleyball, college football and hockey (Tampa Bay Lightning).
@@faiello_mari
Previous Cleveland Browns Still Uncertain of Their #1 Pick
Next Melrose Shares His Thoughts On Upcoming NHL Playoffs