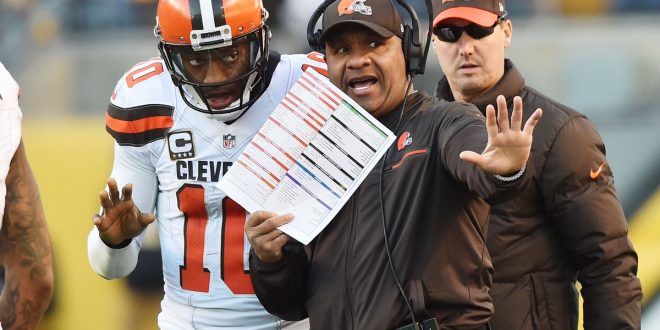 Cleveland Browns head coach Hue Jackson talks with quarterback Robert Griffin III (10) during the second half against the Pittsburgh Steelers at Heinz Field. The Steelers won 27-24 in overtime.

The Cleveland Browns have a ton of options heading to AT&T Stadium on April 26th. They own both the first and forth picks for the 83rd annual NFL Draft. Browns’ General Manager, John Dorsey, still shows no signs of whom they will select. Most draft pundits claim Cleveland will take a quarterback with one of the two top 4 selections. Despite trading the Bills a 3rd round draft pick for QB Tyrod Taylor. They now have a situation in place comfortable for a rookie to transition smoothly into Hue Jackson’s system. Last season, the Browns started 2017 second round draft pick DeShone Kizer from Notre Dame. Kizer threw 22 interceptions to only 11 touchdowns. He had the worst touchdown-interception rating in the NFL. The Browns “bit the bullet” and moved on from Kizer two weeks ago when they traded him for Packers corner back Damarious Randall who was playing out of position in Green Bay according to Mike McCarthy.

The move to bring in Tyrod Taylor will almost certainly improve Cleveland’s offense next season. Taylor is an above average NFL starting QB. He can deliver the ball down the field accurately while limiting turnovers. Taylor owns the third best TD-Int ratio in entire the NFL behind only Tom Brady and Aaron Rodgers. Taylor is also an established leader with playoff experience as opposed to Kizer, a rookie. Dorsey expressed his admiration for Kizer’s leadership attributes in a presser yesterday. Although Taylor is an immediate improvement over Kizer he is not the long term solution for the Browns at quarterback. He is most likely a stop gap for whichever rookie quarterback they select in the upcoming draft.

Cleveland has all of the power sitting at the top of the draft. They are the only team who has the guarantee they get “their guy” on draft night. GM John Dorsey remained tight lipped on Tuesday as to whom that selection might be. It would make sense for the Browns to select their quarterback of the future with either the first or fourth pick.

It seems that the hype is around USC product Sam Darnold. Darnold has shown he is a high upside product in his pro day last week. He will certainly not make it past the second overall pick when the New York Giants select. The Browns would most likely miss Darnold if they waited until the 4th selection to scoop him. Of course the Browns could also select one of the two Heisman winning quarterbacks in the draft: Baker Mayfield or Lamar Jackson.  This scenario seems unlikely as they don’t fit the traditional NFL mold. And the Browns haven’t had the best results when starting recent Heisman winners under center. Mayfield is ominously similar to former Browns’ QB Johnny “Football” Manziel. Lamar Jackson isn’t too dissimilar to former Browns’ Hiesman winner Robert Griffin III either. Of course Josh Rosen and Josh Allen are also QBs who have made a lot of noise as well, and very well could be picked.

.@coachjfranklin: Saquon Barkley should be the No. 1 overall pick pic.twitter.com/Hq2hq1HYQK

It is possible, but unlikely, that the Browns will go off the beaten path and select RB Saquon Barkley from Penn State. His measurables at the combine flew off the page. Some experts compare him to Walter Payton. It is not crazy to think he would be off the board by pick 4 when Cleveland selects again. The Browns could secure Barkley with the first pick and take their chances with the remaining QB prospects after the Giants and Jets potentially take their top guy.