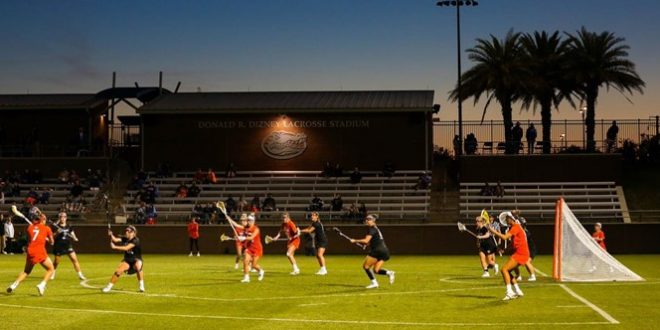 After a week with no action, the Florida Gators lacrosse team returns to the Diz this weekend. Hoping to build on last Saturday’s 16-11 road victory over no. 24 Georgetown, the Gators will host the UConn Huskies.

Ten games into the season and the Gators are 7-3. Their losses all came to ranked opponents in No. 1 Maryland, No. 8 Syracuse and most recently, No. 14 Towson. The Gators have also defeated five ranked opponents to date, including conference-foe Georgetown. Now ahead of them is the bulk of their conference play.

Florida sits atop the Big East conference lacrosse rankings, tied with Temple and Marquette, with a 2-0 conference record. A win against UConn on Saturday would assure them of remaining in this top spot.

Meanwhile, Temple and Marquette will also face off this weekend. The remainder of this season will see the Gators face off against Big East opponents, until the Big East Tournament.

The Gators offense has been working hard, averaging 15.20 goals per game, giving them the 15th best scoring offense in the nation. The Gators have been led by the Pirreca sisters, senior Shayna and junior Sydney. They’ve combined for a total 54 goals and 20 assists so far this season.

They have been able to find offense elsewhere, with five other players in double figures for goals. Last week, freshmen Shannon Kavanaugh stepped up, tallying 6 points in their matchup against Georgetown. In her best collegiate performance to date, she was awarded the Big East Midfielder of the Week award.

On the other end of the field, Florida’s defense has been struggling this season. Their scoring defense doesn’t rank in the top 50, and they allow an average of 12.40 goals per game. Yet, their goaltender, Haley Hicklen has had a pretty remarkable season, with 11.20 saves per game, ranking her seventh in the nation.

However, last weekend, the Gators displayed a spectacular defensive display in the second half against Georgetown. They kept the Hoyas to 3 goals on only 9 shot attempts compared to the Gators 11 goals on 26 shots. If the Gators show this offensive power and build off last weekend’s defensive performance, they’ll be in good shape.

The Huskies Lacrosse team are 5-5 this season, and 1-1 in conference play. In contrast to the Gators, they are struggling on both ends of the field. Their scoring offense and defense average the same amount of goals per game – 12.60. They are coming off a 13-5 loss last weekend to Big East opponent, Denver.

UConn is led by senior Grace Nolan, who has 36 goals and 23 assists this season for an outstanding total of 59 points. This is more than anyone on Florida’s roster (Shayna Pirreca leads with 41 points). Nolan has also received the award for Big East Attacker of the Week this season.

Defensively, the Huskies also have had difficulties in turning over the ball. They cause far fewer turnovers, 115, then they’ve given up themselves, 211. Their goaltender has had a total of 78 saves, averaging 7.8 per game, and again less than their opponents this weekend.

The No. 8 Florida Gators Lacrosse team will host the UConn Huskies this Saturday at the Donald R. Dizney Stadium here in Gainesville. The match is set to begin at 12 pm and you can catch the game on Big East Digital Network.