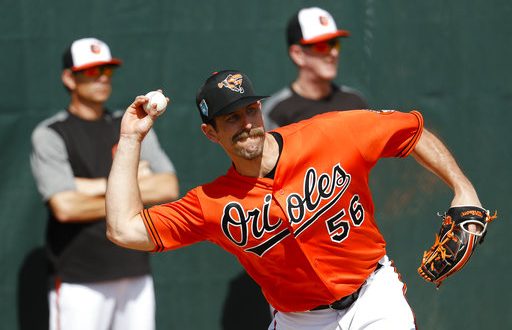 Florida Gators in the MLB

The Florida Gators have a rich history of baseball dating back to their first College World Series appearance in 1988. Since then, the Gators have made the CWS 10 more times, securing their first national championship last season in 2017. Below is a list of former Florida sluggers and pitchers in Major League Baseball.

O’Day played at Florida under coach Pat McMahon from 2003 until 2006. O’Day was an Academic All-American and pitched in relief for the Gators during the 2005 College World Series. The submarine-style pitcher was voted an All-Star in 2015 and is currently with Baltimore Orioles. O’Day has been in Baltimore since 2012. In 2015, he signed a 4-year, $31 million deal with the O’s.

Zunino’s career in Gainesville was exceptional. The former Gator backstop played under coach Kevin O’Sullivan from 2010-2012, earning First-Team All-American honors his sophomore and junior years. He earned SEC Player of the Year in 2011. During his final season at UF, Zunino won the Johnny Bench Award for the best catcher in college baseball, the Dick Howser Trophy for the top collegiate baseball player and the Golden Spikes Award for the best amateur player in baseball.

In the 2012 MLB Draft, the Seattle Mariners drafted him 3rd overall. Zunino is currently the starting catcher for the Mariners and has 75 home runs during his MLB career.

Poyner pitched at Florida from 2012-2015 under coach Kevin O’Sullivan. He was named to the SEC Academic Honor Roll during the final three years of his career in Gainesville and the Boston Red Sox drafted him in the 14th round of the 2015 MLB Draft by the Boston Red Sox. He recently made his MLB debut for Boston on March 31.

Johnson pitched at the University of Florida from 2010-2012 under coach Kevin O’Sullivan. Johnson was a two-way player, both pitching and playing first base during his time in Gainesville. He was a member of the USA National Collegiate team in 2010 and 2011 and was named to the SEC All-Freshman Team in 2010. The Boston Red Sox selected Johnson 31st in the 1st round of the 2012 MLB Draft. Johnson made his 2018 debut on Tuesday night, going 6 innings and allowing 1 earned run with 5 strikeouts in a win versus the Miami Marlins.

Tucker played for the Florida Gators from 2009-2012 under coach Kevin O’Sullivan. In 2009, the National Collegiate Baseball Writers Association named Tucker as the Freshman Hitter of the Year and the SEC named him Co-Freshman of the Year. The Houston Astros drafted Tucker in the 7th round of the 2012 MLB Draft.  Tucker played in Houston from 2015-2016. In December of 2017, Houston traded him to the Atlanta Braves. Tucker appeared in 4 games with the Braves this season, recording at least one hit in every contest he’s participated in. Tucker plays left-field in Atlanta.

Fontana played for the Gators from 2010-2012 under coach Kevin O’Sullivan. Fontana won a gold glove playing infield his freshman year and named a Freshman All-American in 2010. He and teammate Brian Johnson both played for the USA National Collegiate Team in 2010. Fontana was a finalist in 2011 for the Brooks Wallace Award, which is given to the NCAA’s top shortstop. The Houston Astros took Fontana in the 2nd round of the 2012 MLB Draft, 61st overall. The former Gator is now a member of the Los Angeles Angels, who claimed him off of waivers in 2017, but is yet to appear in a game in 2018.

When you get your first #MLB hit AND home run in the same at bat, we definitely want to hear all about it. @NolanFontana @Angels pic.twitter.com/Udm9fHffLQ