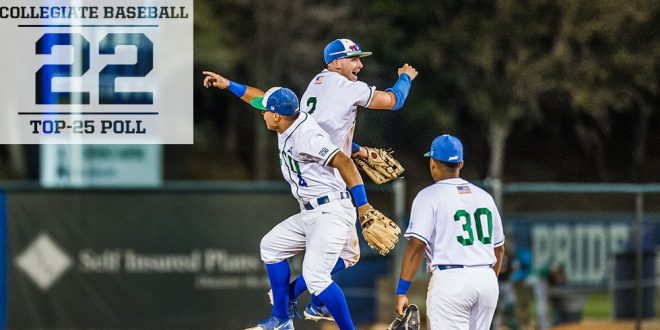 No. 22 Eagles on the Rise Heading into Gainesville

The Eagles are hot, red-hot. They’ll put their nine-game winning streak on the line Tuesday night against an equally hot No.1 Gators team.

But, if you ask were to ask FGCU head coach Dave Tollett his team is nothing more than a solid ball club.

“If we are, what makes us special is that we play well as a team together,” he said. “Through the course of our 27 games it hasn’t been just one person.”

Tollett said his team’s offensive performance has surprised him this season. He said he expected the Eagles to be better on the mound this season than at the plate.

FGCU is currently hitting .289 as a team over this current streak, considerably under its .314 for the season. But, they are still averaging over eight runs a game.

He said his team is just finding ways to score and attributes that to generating a lot of two-out hits.

“That’s been happening all year for us,” Tollett said. “If you told me we were going to hit .290 at the beginning of the year I would’ve took it.”

One player who has been contributing in a big way for Tollett’s team is sophomore infielder Richie Garcia. During this nine-game streak, Garcia is hitting over .400 with 10 RBIs and a slugging percentage of over .700.

Garcia leads the Eagles in these offensive categories:

Garcia isn’t the only guy who is raking. The Eagles have eight players hitting better than .300 on the year.

Tollett on the depth of his team:

FGCU will be throwing junior right-hander Evan Lumbert, who earned Atlantic Sun Conference Pitcher of the Week recognition on Monday after earning his fourth win of the year against the Miami Hurricanes. He allowed just two hits over eight innings and struck out a career-high 12 batters.

Tollett said the bullpen was the team’s  weakness early on in the season, but now his pitchers are in specific roles. He said if the Eagles have a chance if they get to their closer Kenton Hering, and that has been difficult for them.

“We’ll throw him more like a stopper-type more than a closer-type,” he said. “We’ll worry about the ninth when we get there. But, we were giving up too many big innings in the bullpen so we switch that around so we’re not scared to throw our closer whenever we need.”

For the season, the Eagles have a team ERA of 3.78. However, that stat is a full point lower at 2.78 during their winning streak including two shutouts.

As a team, the Eagles are fielding .959. Tollett said fielding was an issue early with multiple players. He said they are now fielding over .980 in the team’s last 10 games.

“You have to be able to pitch and play defense,” Tollett said.

The Eagles will certainly try to do that as they look to take down another major Florida school and build on its season sweep of the Gators from last season.

The game can be seen via WatchESPN at 6 p.m.