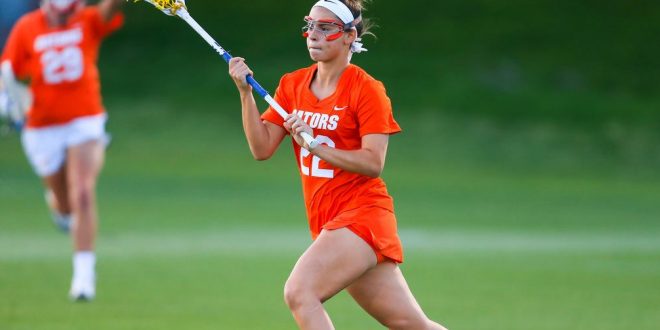 The Gator Lacrosse team took down the Temple Owls Wednesday afternoon with a final score of 15-3.

The Gators defense looked sharp Wednesday. Florida limited Temple to just 13 shots over the course of the game. The Gators were powerful in the draw circle, taking 14 of the 20 draws. Freshman Sabrina Cristodero was a standout, winning 10 of those draws.

Temple’s three goals are the lowest amount Florida has allowed in a game all season.

Early Lead Proves to Be Enough

Florida was in control throughout each half. The Gators got out to a lead almost immediately, thanks to a Shayna Pirreca goal within the first two minutes. Florida took a 6-0 lead before Temple would even score a goal. The halftime score was in Florida’s favor at 10-2.

The second half came down to a running clock with 27:19 left to play. Goals from Sydney Pirreca, Shayna Pirreca, Lindsey Ronbeck and Grace Haus showed Florida’s all-around team effort.

The Gators have now won 26 of their games against Big East opponents in a row.

The Gators will travel to Villanova to take on the Wildcats on Saturday at 11 a.m.

Born and raised at the ballpark! Typically quiet- until it comes to sports. I'm a South Florida native with a passion for baseball nearly as strong as my faith. Grew up in garnet + gold, turned out sporting orange + blue. Likely to be found with a camera. And yes, I take food pictures.
@victoriarossman
Previous Ravens Give RGIII Another Shot at the NFL
Next Bubba’s plan to sneak into another jacket