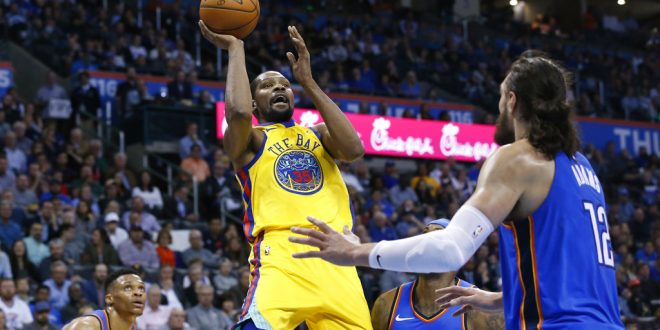 Golden State Comes Out on Top Over Rival Oklahoma City

It’s always an intense matchup when the Oklahoma City Thunder play the Golden State Warriors. On Tuesday night, these two Western Conference teams took the court in Oklahoma City. The Warriors came out on top with a final score of 111-107.

It’s no question that OKC fans are still a bit salty over former OKC forward Kevin Durant’s departure to the Golden State Warriors. Every time the Warriors come to OKC,  Durant is booed throughout the game.

However, that didn’t stop him from dropping 34 points for the Warriors that night.

To start off, OKC took advantage of the home court as they went on a 7-0 run to open up the first quarter. This was when the Warriors seemed to struggle. However, after the first half of the quarter, Durant fell into a rhythm and added 15 points for the Warriors. However, OKC still led this quarter 27-21.

The Thunder slowed down after the first quarter. The offense just wasn’t keeping up. The Warriors took advantage of their mistakes and outscored them 33-20 in this second quarter.

Second Half Owned By the Warriors

The Thunder started to push the tempo during the second half. Their offense was stronger and this was when Russell Westbrook started to shine. In the third quarter, he hit 17 points.  That was the start to a 23-13 run including a three from Westbrook. The lead was close, but Golden State led after the third quarter, 84-81.

In the fourth quarter, it was all or nothing. With a 94-91 Golden State lead, Westbrook’s shot from downtown made it a one point game. However, Durant didn’t let that go with a three as a response. Damian Jones helped out by adding six points during the final minutes of the game. After a Jones dunk, OKC was behind 107-101. After some free throws by Paul George, a dunk by former Gator Corey Brewer and a layup by Westbrook, OKC was only behind by two with 18 seconds left in the game, 109-107.

However, with 10 seconds left, Draymond Green sealed the deal for the Warriors by making both of his free throws. There just wasn’t enough time and the Warriors came out on top 111-107.

The leaders for the Warriors were Kevin Durant, who led with 34 points, and Klay Thompson, who added 20 points. Draymond Green led on the assist side for the Warriors with eight, including five rebounds and five points. This team is full of players who missed the game, including crucial players like Steph Curry, who was out with an MCL Sprain, and Andre Iguodala with knee soreness. They had other guys out as well like Kevon Looney (flu), Shaun Livingston (personal reasons), Omri Casspi (sprained ankle), and Patrick McCraw (lumbar spine contusion).

“Especially when we come in here it’s always a hostile environment,” Durant said. “We were short some guys, we only had 10 guys, so we just try to step up. But we got good looks and were confident with those looks and we got a good win.”

Now, Golden State will travel east to play the Indiana Pacers on Thursday.

Up next, the Thunder will travel to Houston to take on the conference leader, the Rockets, on Saturday. 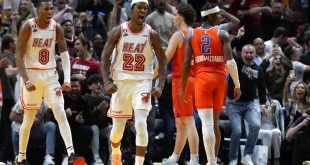 Not only did the Miami Heat edge the Oklahoma City Thunder 112-111 Tuesday night, but …