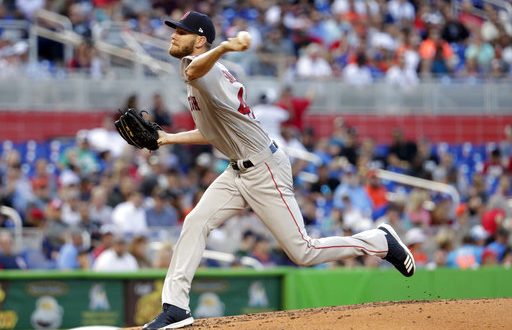 The Red Sox hung in there and gained another win to now give them a 5-game win streak.

The Marlins started José Ureña and the Red Sox started their ace pitcher, Chris Sale. At the top of the first, right fielder J.D. Martinez singled to center and drove in Andrew Benintendi putting Boston on the board first. The Marlins came out hot and made Sale throw a 30-pitch inning but they couldn’t put together a run.

Moving to the second, Ureña seemed to settle in and was able to retire 10 Red Sox hitters in a row. Marlins 1st basemen Justin Bour hit a ball to center field and Jackie Bradley Jr. made an incredible diving catch to get Bour out. Sale ended the 3rd with an easy 1-2-3 inning.

A scoreless third inning brought Sale back out for the bottom of the fourth and he allowed a single. That brought Bour back up to the plate. A fly ball to right field appeared to be an easy out but Martinez seemed to have a poor read on it allowing Bour to get a double out of it. This drove in Lars Anderson and the Marlins tied it up 1-1.

Heading to the fifth inning, Sale threw another 1-2-3 inning and that ended his night. He threw 93 pitches, six strikeouts and only allowed one run. Poor base running made by Rafael Devers in the bottom of the fifth after his leadoff double, gave the Marlins an easy out.

Back-to-back singles with only one out in the sixth inning looked promising for Boston. Instead of the opportunity for an RBI, Martinez grounded into an inning ending double play.

Boston brought out rookie pitcher and former Gator, Bobby Poynor, from the bullpen for the sixth and seventh. He struck out two in the sixth and got two out in the seventh before allowing a single.

Going into the eighth, Boston again looked to be promising as Ureña ended his night in the seventh. Bradley had a leadoff double and again, more poor base running plagued the Red Sox. Bradley reached third from a deep fly out and then a ground ball by Eduardo Nuñez led to a close out at home plate.

Next came a bone dry 9th and 10th inning and if you’re keeping track the game was still tied at 1-1. No runs were accounted for from the fourth to the 10th inning.

The game going into extra innings brought a new life to both teams. Nuñez got a double into left field at the top of 11th which brought Benintendi up to hit. Reaching base twice already, he got a single to right field to score the go ahead run. Boston up 2-1 at the middle of the 11th.

Boston brought out right handed pitcher Matt Barnes for the bottom of the 11th. After two quick outs, he walked two in a row. Outfielder Cameron Maybin hit a huge double to deep left which ran in Brian Anderson. Back to tie score, 2-2.

The 12th was another uneventful inning.

The Red Sox finally took the lead in the 13th. Mookie Betts hit a single and then moved to second on a groundout. Next came an intentional walk to Benintendi. Hanley Ramirez delivered once again with a huge double to left field that brought both Betts and Benintendi into score.

Relief pitcher Heath Hembree got it done at the bottom of the 13th allowing only one hit.

A mere 13 innings later, it's a W! pic.twitter.com/qf98tWDbEV

After playing multiple extra inning games, Boston Manager Alex Cora, is happy they were able to come out with two wins against the Marlins. He thought the game was good and didn’t seem to mind the length of the game.

Boston claimed wins in both games in Miami and they are now 5-1. They will open home season play Thursday with a three-game series against the Rays.

The Marlins are now 2-4 and will head to Philadelphia Thursday for a three-game series.

Junior studying telecommunications- news at the University of Florida. Multimedia Sports Reporter for ESPN Gainesville as well as a Multimedia Journalist for WUFT News.
@acheney21
Previous Golden State Comes Out on Top Over Rival Oklahoma City
Next Kawhi Leonard’s Future With Spurs Uncertain