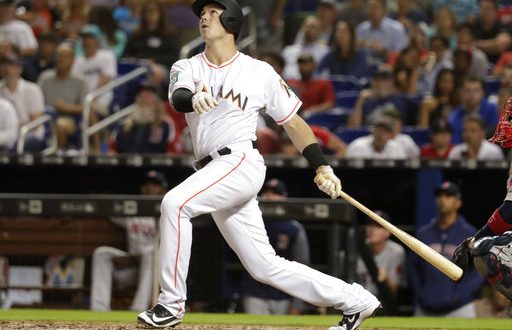 Miami Marlins' Brian Anderson flies out in the seventh inning during a baseball game against the Boston Red Sox, Tuesday, April 3, 2018, in Miami. The Red Sox defeated the Marlins 4-2 in thirteen innings. (AP Photo/Lynne Sladky)

After going 0-2 against the Boston Red Sox, the Miami Marlins find themselves at 2-4 to start the season. They will now try to win their first series of the year against the Philadelphia Phillies.

Heading into the bottom of the 11th inning Wednesday against the Red Sox, the Marlins had a prime opportunity to get the win. With a runner in scoring position,  Justin Bour was thrown out at home as shortstop Xander Bogaerts saved the game for Boston.

It was two innings later that former Marlin Hanley Ramirez hit a two-run homer to secure a 4-2 victory. The Red Sox are now 5-1 and off to their best start since 2006.

“A playoff game right there, it looked like,” Ramirez said. “If you can win the close games, it’s always good.”

The Marlins have had some tough breaks to start the year as they have gone overtime in three games along with 13 extra innings.

Looking Ahead to Philly

The Marlins now take on a team who has also gotten off to a rough start. The Phillies are 1-4 with their only winning coming in the 11th inning against the Atlanta Braves.

On the mound for the Marlins will be Caleb Smith. Smith has pitched 5.1 innings to go with a 1.69 ERA and eight strikeouts. Pitching for the Phillies will be Nicholas Pivetta. He has started one game and has a sub-par 6.75 ERA paired with three strikeouts and four innings pitched.

#PhilsPhact: Dating back to last season, we have won each of the last five games @Npivetta27 has started, and seven of his last eight starts overall. pic.twitter.com/xYu1B9GBGt