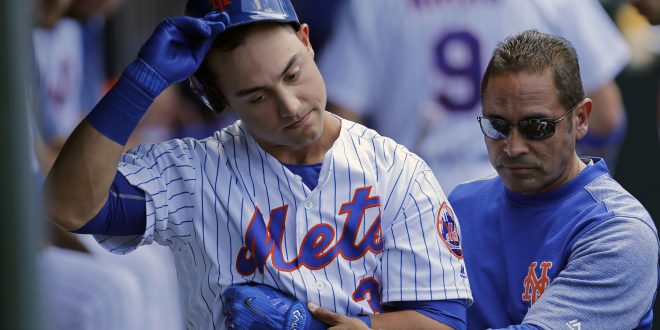 New York Mets Michael Conforto is helped into the clubhouse by team trainer Ray Ramirez after injuring himself swinging his bat during the fifth inning of a baseball game against the Arizona Diamondbacks on Thursday, Aug. 24, 2017, in New York. (AP Photo/Adam Hunger)

The NL East-leading Mets face the Washington Nationals for their first road trip of 2018 and it marks the season debut of Met’s outfielder Michael Conforto.

The Mets (4-1)  are coming off a two-game sweep of Philadelphia and the Nationals (4-2) just dropped two out of three to Atlanta. Each team is led by first-year managers in Mickey Callaway for NY and Dave Martinez. The Nationals face the highest expectations in the division, after firing their manager who lead them to a 97-win season.

New York gets a huge boost with Conforto, who was thought to be out until May 1. He hit 27 home runs in just 109 games last year.

The Nationals are led by Bryce Harper who already has 4 home runs through the first 6 games. Nat’s left fielder Adam Eaton, who missed most of 2017 with a torn ACL, won NL player of the week honors last week by going 8-13 with two home runs.

deGrom will look for his second win of the year Thursday at 1 P.M. He went 5.2 innings and allowed 1 run and 7 Ks in a 6-2 win over St. Louis. He dealt with some command issues he’ll look to clean up in this start.

Strasburg struck out seven in 6.1 innings of one-hit ball in a win over the Reds.

The teams have a day off on Friday before facing off at 1 PM on Saturday. Matz didn’t make it far during his first start, going four innings and giving up three runs and walking three in a loss.

Gonzalez, went six innings giving up one run in a win for Washington.

Harvey faces Roark on Sunday Night Baseball at 8 PM, coming off one of his best performances in recent memory. He threw five innings of shutout ball in a no-decision (that the Mets went on to win).

Roark, the National’s fourth starter, threw seven innings of one-hit ball in a win against the Braves his first start.