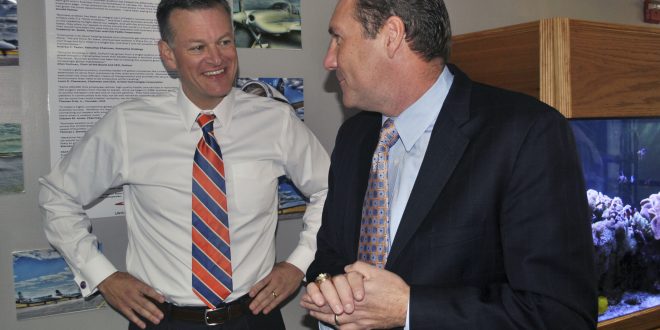 FILE - In this Monday, Nov. 27, 2017, file photo, University of Florida athletic director Scott Stricklin, left, smiles as he talks to Florida's new NCAA college football coach Dan Mullen after Mullen arrived at the airport in Gainesville, Fla. Stricklin has a long-term plan to give The Swamp a much-needed face-lift. Stricklin said he wants to “find ways to upgrade the overall quality” of the fan experience inside the outdated football stadium. (AP Photo/Mark Long, File)

Gator Football: One Week Left of Practice Before Spring Game

One week of practice remains before the Florida Gators Orange and Blue spring football game. Head Coach Dan Mullen highlighted in a press conference today about the schedule for this week leading into the game and about results from the past week. Despite the rainy and gloomy weather at the beginning of the week, the game on Saturday, April 14, is predicted to be mostly sunny.

Mullen says that the focus of the last week of practice is in cleaning up rather than installation. He also included that the last scrimmage was good, but the players need to practice playing in certain situations. He says that the attitude of the players heading into the game was better than the first two scrimmages. Therefore, the team will have various types of practice this week to accommodate different areas of the game and the needs of players. On Tuesday, the Gators are opening practice to law enforcement, first responders, city officials and their families. For the rest of the week, Florida has a situational day, “play the game” day and a no-helmet practice.

Mullen says players will be able to feel the pressure again of how fast the game is when playing.

The players are all trying to get better as a unit. Mullen describes that he is focused on getting better when asked if there is any separation at quarterback. With a new roster and a lot of time before he has to make any decisions, Mullen is not concerned with the quarterback competition. He highlights that this is the case with all positions since every player is fighting for game time. However, he wants his quarterbacks to complete a higher percentage of passes in the future.

The @GatorsFB #OBGame is Saturday at 3pm

As in previous years, the following road closures will be in effect 3 hours prior to kickoff, and up to 2 hours following the end of the game

For spring football overall, Mullen likes the attitude of his team and how they are learning. He also says that effort is a part of the learning process.