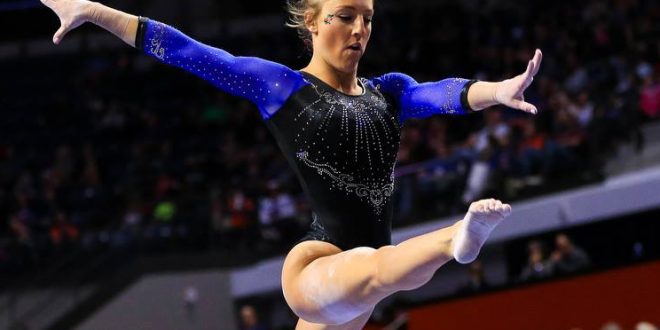 The No. 5 Florida Gators gymnastics team won its six-team NCAA regional Saturday night in State College, Pa. and will compete for the national championship in two weeks. Six regionals, each consisting of six teams, took place this weekend. The top two teams from each regional advanced to the NCAA Championship meet, which will be held in St. Louis, Mo. April 20-21. On April 20, two semifinals will be held, with the top three teams in each session advancing to the Super Six on April 21 to determine the national champion.

The Gators’ regional in State College, Pa. also included Washington, Arizona State, New Hampshire, Penn State and West Virginia. Florida won the regional comfortably, posting a score of 197.725. Washington finished a distant second at 196.275 to pick up the other NCAA Championships berth. The win was the 18th regional championship in Gators history and the seventh in a row. Additionally, there have been 37 NCAA Championship meets. The Gators have appeared in 36 of them, missing out only in 2000. Florida has advanced to the Super Six 12 of the past 14 years.

The Gators posted the highest team score on every apparatus except floor exercise. Florida scored 49.4 on vault, 49.5 on uneven bars and 49.5 on balance beam. The 49.5 on uneven bars tied for the Gators’ third highest score on bars this season. Perhaps feeling the nerves, the Gators posted their two lowest scores in their first two events. Florida opened on floor, posting a 49.325 that ranked behind Washington’s 49.35. Next came vault, where UF scored 49.4. The Gators got stronger as the meet went on, scoring the two 49.5’s on their final two events. Florida pulled away from Washington on vault, where the Huskies scored an abysmal 48.75 and did not receive a score higher than 9.775.

“It was a great night,” Gators coach Jenny Rowland said. “We came in and did our job, and that’s what we set out to do. The team performed tonight like they have been doing in the [practice] gym. This team has a lot to be proud of.

“This was really the best meet we have had on the road this year. It was really good to see the team perform at this level with the nerves and knowing that they have to qualify to nationals. They handled everything under pressure very well.”

Just how dominant were the Gators? A Gator finished first and second on every apparatus and in the all-around. On floor, junior Alicia Boren and senior Rachel Slocum were part of a five-way tie for first with scores of 9.9. The victory was Slocum’s first floor title at Florida. She won six floor titles at Eastern Michigan prior to transferring to UF. Slocum also won vault with a 9.95, while classmate Alex McMurtry finished second with a 9.925.

“Rachel Slocum — oh my gosh!” Rowland said. “She had an amazing vault! The best vault I have ever seen her do in her entire life. I am super excited for her.”

McMurtry took the bars (9.975), beam (9.95) and all-around (39.725) titles to give her 26 event titles this season, a career high. McMurtry’s all-around score was a tenth of a point off the school record, which see owns co-owns with Bridget Sloan and Alaina Johnson. Sophomore Rachel Gowey and freshman Megan Skaggs tied for second on bars with 9.9. Gowey and Boren finished second and third on beam. Sophomore Amelia Hundley took second in the all-around with a score of 39.3.

Gators Head to St. Louis in Search of Revenge

Florida finished with the fifth-highest score nationally in the regionals and thus will be the fifth seed in St. Louis. The Gators’ semifinal meet will feature No. 1 Oklahoma, No. 4 Utah, No. 8 Washington, No. 9 California and No. 12 Kentucky. UF will compete in the night session at 7:00 on ESPNU.

The Gators are searching for redemption on multiple fronts. First, after winning three consecutive team national championships from 2013-2015, the Gators finished fourth in 2016 and third in 2017. Second, Chaifetz Arena in St. Louis, Mo. hosted the 2018 SEC Championship meet. In that meet, McMurtry, one of the most accomplished Gator gymnasts of all time, and Skaggs both fell on floor. As a result, the Gators had to count Skaggs’ 9.175. UF finished third, less than six tenths of a point behind champion LSU. If the Gators had merely scored a 9.75, an extremely low score, they would have won the SEC Championship.

“A good loss is really motivating sometimes, and I think that is what SEC’s did to us,” McMurtry said.

In two weeks, they’ll return to the same arena in search of redemption. Florida will also seek to send McMurtry out with her second team national championship.