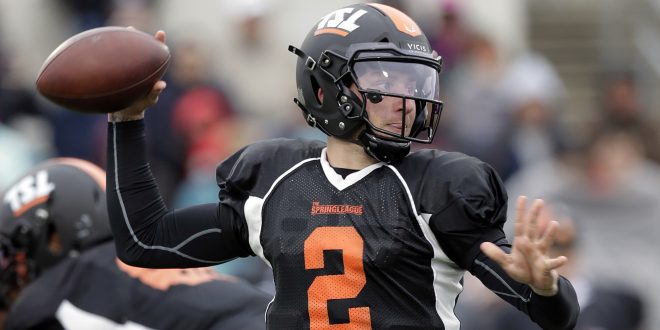 Johnny Manziel participated in a competitive football game for the first time in two years on Saturday. He played quarterback for the South team in the Spring League in Austin, Texas. Manziel played for about two quarters, going 9-of-15 for 83 yards and one touchdown en route to an 11-7 loss.

Johnny Manziel (@jmanziel2) reminded us yesterday how electrifying he can be. Welcome back, sir. Many more good times ahead. #comebackszn #TheSpringLeague pic.twitter.com/k1MpLfmQqR

The Spring League is designed to be an elite developmental league and scouting event for professional football talent.

Mike Florio from NBC Sports says, “At a time when the NFL has no developmental league, The Spring League is the closest thing to an apples-to-apples opportunity for players to get game reps. It’s starting small, but that could be the best way to go.”

The Spring League is only four games long, and will last until April 13th.

The last time Manziel played a competitive football game was when he was with the Cleveland Browns on December 27th, 2015. After that game, he was released, and his descent out of football and into madness began. Manziel struggled with drugs, substance abuse, and bipolar disorder during his two-year hiatus from football. Also, Manziel was involved in an altercation with his girlfriend. He allegedly struck her in a hotel room and several more times on their way to her apartment. Manziel went to rehab for 60-to-90 days and is now making progress towards his NFL comeback. He’s promoting his hashtag, #ComebackSZN, to keep himself motivated to stay on the right track.

Manziel was frustrated his team didn’t win but knows how important these games are for him. He said, “…So as frustrated as I am now, I made it through the two quarters that I did play. I’m Healthy. Had fun. I had fun nonetheless….” For Manziel, The Spring League is much more than just a return to football. It’s a chance for him to get his life back on track, and he’s enjoying every second of it.

Manziel will play again on Thursday at Kelly Reeves Stadium in Austin, Texas. Kickoff is at 5:30.