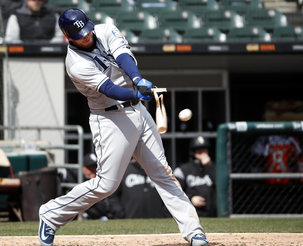 On Tuesday, the Tampa Bay Rays won 6-5 over the Chicago White Sox. The Rays jumped out to an early 4-0 lead followed shortly by a solo home run from Carlos Gómez. Blake Snell gave up only 1 hit and 1 run through 6 innings and struck out ten batters.

The game really got interesting in the bottom of the 9th when José Abreu ripped a 3-run home run against Rays closer Alex Colome to bring the Sox within 1. However, they fell just short.

On paper, this seemed like a great game to watch. There were a few home runs and some great pitching. Unfortunately, this wasn’t enough to sell many Chicago residents on going, as there was less than a thousand people in attendance.

It was the perfect storm. This game was played on a cold Tuesday afternoon. Both teams are recovering from a sluggish start to the season, entering the game 2-8 and 3-6. If that weren’t enough, the Cubs were playing at Wrigley at same time, highlighted by a first pitch thrown from beloved Loyola-Chicago fan Sister Jean. The result was a sea of cold, empty seats looking down an all-around great game. For reference, the lowest attendance game ever, not including a 2015 Baltimore game played in front of nobody in which fans weren’t allowed to go due to safety concerns, is believed to be an April 1979 game in Oakland that had 250 spectators.

Slow Out of the Gate

The teams play again in Chicago today at 2:10 to end their three-game series. Yonny Chirinos is expected to make his second career start for the Rays. He will be pitching opposite of Chicago’s James Shields, a more experienced opponent in his twelfth year in the league. A win today would secure a series sweep for the Rays, which they desperately need after opening the season by losing 8 of their first 9 games. What they really need is more production from their Gold Glove outfielder Carlos Gómez, who is currently batting .220. He did hit a home run in this game, so he is heading in the right direction.

The Sox haven’t had a much better season so far, as they lost 7 of their first 8. If they have any hope of improving, they need to clean up their mistakes. In this game, an error by outfielder Nicky Delmonico lost the Sox an extra run. Considering this game was determined by one run, an error has proven more than enough to cost them wins.

It is important to remember not to get too low and dismiss these teams too early. It is a long season, longer than any other major sport, so there is more than enough time for a resurgence.