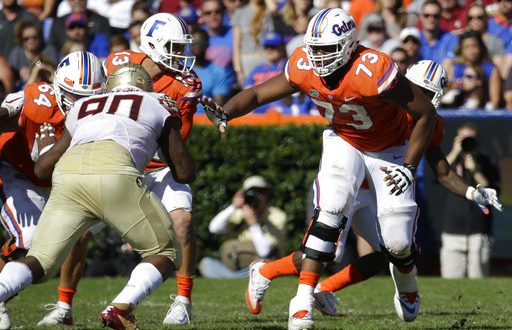 Will Last Year’s Offensive Line Show Up to This Year’s Spring Game?

Spring football promises new beginnings. After the 2017 season, the Florida Gators’ offensive line could use one.

For the second time in the last three years, the team’s trenchmen conceded over three sacks per game. Roughly one-in-six of the Gators’ offensive snaps were blown up in the backfield. According to CFBStats, Florida’s quarterbacks were hauled to the turf 37 times in 11 games — 13th-most in the nation and worst in the Southeastern Conference.

is this the florida gators or the new york giants? no o-line to be seen

Touted by former head coach Jim McElwain as one of the team’s strengths, last year’s unit was humiliated from the jump. It’s something that’s still fresh on some veterans’ minds.

“It’s our last chance. Our last chance to get it right,” senior tackle Martez Ivey said. “We didn’t come here to go 4-7. We came here to compete for championships.”

They might need some help if they have any hope of fulfilling that dream.

Despite last season’s debacle, the Gators possess decent experience along the front line. Five of the team’s primary linemen — seniors Fred Johnson, Tyler Jordan, and Ivey, along with junior Jawaan Taylor and redshirt junior T.J. McCoy — appeared in at least nine tilts season, and all elected to return following a 4-7 year.

The room’s also set to receive a boost in the form of starting left guard Brett Heggie, who’s on track to return this fall from a season-ending knee injury suffered in a loss to Missouri.

The biggest spark, however, may come from one of the unit’s new faces.

With nearly 20 rostered linemen at their disposal, they could be tinkering right until the season opener.

“A lot of times, one’s, two’s and three’s are getting equal reps,” Mullen said. “It can get watered down in a hurry, but what we have to do by that time is find eight guys that can play.”