Home / NFL / Will The Denver Bronco’s Trade The Number 5 Pick? 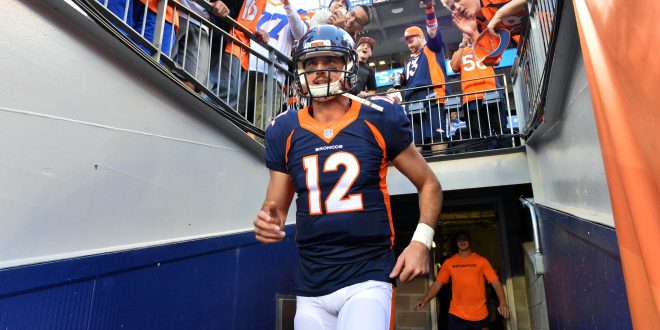 Will The Denver Bronco’s Trade The Number 5 Pick?

The 2018 NFL Draft begins next Thursday and the Denver Bronco’s who currently have the 5th overall pick are considering a trade. Broncos General Manager, John Elway announced Thursday the organization is considering trading up in the Draft. However, some believe this could hurt the team because the draft is so QB heavy and the Bronco’s have question marks at that position.

So far, it’s only a possibility that the team could trade up. Elway says that the team is still researching the best way to approach the Draft.

The 2018 draft is full of quarterback talent. Currently the top two QB’s on the Bronco’s roster is Case Keenum and Paxton Lynch. Just last month Keenum was signed to a two year deal. Keenum, was asked what he would think if the Broncos were draft another QB with the number 5 overall pick, “I’m going to stay hungry. I’m going to stay consistent to the mindset that’s gotten me here.” Also, back in 2016 Paxton Lynch was drafted in the first round, but has been unable to live up to the hype.

If the Bronco were to make a trade it could be very good for another teams struggling at that position. The teams ahead of the Denver Bronco’s are the Cleveland Browns who have the number 1 and 4 spot, the New York Gaints at number 2 and the New York Jest at number 3. Some of the top QB’s heading into the draft are Sam Darnold (USC) , Josh Rosen (UCLA), Josh Allen (Wyoming) and Baker Mayfield (Oklahoma).

Follow me on Twitter @SarahCarlieUF or Instagram @sarahcarlie
@SarahCarlieUF
Previous New York Giants Try To Make Giant Impact with No. 2 Pick
Next No. 1 Florida Baseball Wins Series Against No. 9 Kentucky

The Cleveland Browns finished third in the AFC North the past two season, even after …