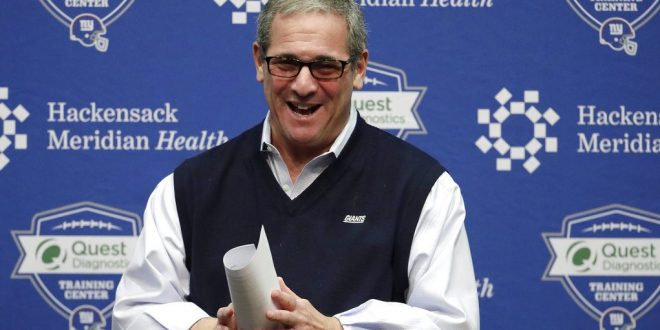 New York Giants general manager Dave Gettleman speaks to reporters at the conclusion of a press conference ahead of next week's NFL football draft, Thursday, April 19, 2018, in East Rutherford, N.J. The Giants have the second overall pick in the draft scheduled to start on April 26 at AT&T Stadium in Arlington, Texas. (AP Photo/Julio Cortez)

The New York Giants are in an unusual spot in this year’s draft after a beyond unusual season a year ago. Normally, the Giants are toward the top of the NFC standings. However, after an abysmal 2-14 season marred with turmoil, the Giants find themselves toward the top of the NFL Draft. The most notorious instance was perhaps head coach Ben McAdoo benching franchise quarterback Eli Manning ending his consecutive games start streak. McAdoo was fired Dec. 4 after a 2-10 start thus starting the rebuild process. The Giants hired Carolina Panthers general manager Dave Gettleman for the same position Dec. 28, 2017. Then the team hired Vikings offensive coordinator Pat Shurmur to replace McAdoo as head coach Jan. 22. With the second pick in the Draft, the Giants have a choice of some of the top prospects in a deep draft, with many in a New York state of mind. It just depends which of these prospects the Giants front office have in mind.

With the presence of Eli Manning still in New York, the quarterback position isn’t an immediate need for the Giants. Other positions the Giants will aim to fill in this draft include offensive tackle, outside linebacker and running back. With most projections having the Cleveland Browns selecting a quarterback, the Giants have the possibility to fill the need a running back with what some scouts are calling the most talented player in the draft. Penn State running back Saquon Barkley has dazzled scouts the last three years at Penn State, with the last two years solidifying his place as an elite NFL prospect. In his final season with the Nittany Lions, Barkley rushed for 1,271 yards and 18 touchdowns. He finished fourth in the Heisman voting.

Barkley showcased his pure athletic talent at the NFL Combine. He ran an eye-opening time at the 40-yard dash at 4.4 seconds and had 29 reps on the bench press. Draft experts are saying Barkley is the first close to sure-thing prospect since Andrew Luck.

Gettleman said Barkley is a truly special player and everyone can see it.

Even though Eli Manning is still the guy for the Giants, his time is running short. Manning turned 37 in January and is in the end of his career. With the multitude of quarterbacks available in this draft, the Giants have the option to get Manning’s replacement. This could allow the coaching staff to groom him while Manning finishes his career. The name linked to the Giants is UCLA quarterback Josh Rosen, who has expressed interest in playing in New York.

However, the team also has the option to get a boatload of draft picks from a team looking for a quarterback through a trade. Teams such as Buffalo and possibly Miami could be willing to work out a deal for a top signal caller.

Gettleman said the team is open to listening to offers for the number two pick.

The new era of New York Giants football wants to make this year’s appearance at the top of the draft a one-time thing. They hope to bring the Giants back to the top of the NFC East standings and challenge the defending champion Eagles. If the Giants make the best selection, the turnaround can be a quick one.

Gettleman said this pick could be damaging for the franchise, if the pick is a bust.

Previous Gators Football: Cece Jefferson Has Surgery, McArthur Burnett to Transfer
Next Will The Denver Bronco’s Trade The Number 5 Pick? 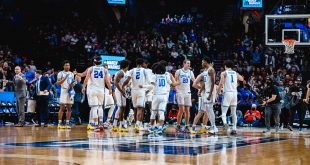 No. 4 seeded UCLA Bruins matchup against the No. 8 seed UNC Tar Heels in …