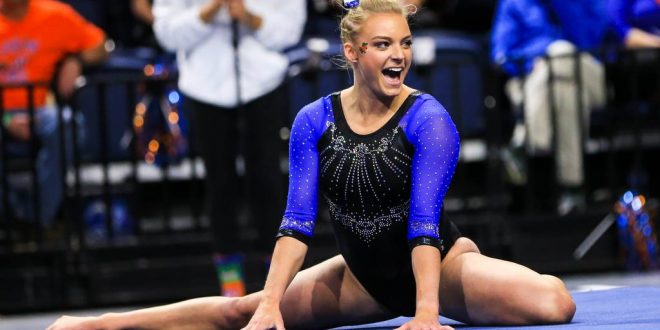 The Gator Gymnastics team is advancing to the NCAA Super Six after a stellar semifinal performance Friday in St. Louis, Missouri.

The Gators started the evening on uneven bars for the first rotation. Alex McMurtry led the Gators in this event, earning a 9.950. Teammates Amelia Hundley and Rachel Gowey followed closely behind, each earning a score of 9.900. Florida closed out Rotation I with a total score of 49.475.

Florida moved to beam for the next rotation. Sophomore Rachel Gowey executed her routine almost perfectly, scoring a 9.913. This is the fifth-highest score ever by a Gator in NCAA beam semifinal action. The Gators closed out Rotation II with a score of 98.788.

Florida then had a bye for the third rotation. The Gators held second place after three rotations with 98.7875.

The fourth rotation saw the Gators on floor. Freshman Alyssa Baumann’s routine earned her a team-high 9.950, her collegiate-best. However, a stumble from Rachel Gowey would give her a 9.188, lowering the team’s overall score for this rotation. At the end of Rotation IV, Florida’s total score was at 148.100.

To close out the NCAA semifinal, Florida moved to vault. A stellar performance from Alex McMurtry earned her a near-perfect score of 9.938. Alicia Boren put on a strong performance as well, scoring a 9.925. Florida finished the night with a final score of 197.588.

The Gators are advancing to the NCAA Gymnastics Super Six. Florida returns to the floor Saturday on ESPNU at 7 p.m.

Born and raised at the ballpark! Typically quiet- until it comes to sports. I'm a South Florida native with a passion for baseball nearly as strong as my faith. Grew up in garnet + gold, turned out sporting orange + blue. Likely to be found with a camera. And yes, I take food pictures.
@victoriarossman
Previous Gators Softball Crushes Mississippi State in Game One
Next No. 5 Gators Complete Sweep of No. 19 Bulldogs in Doubleheader