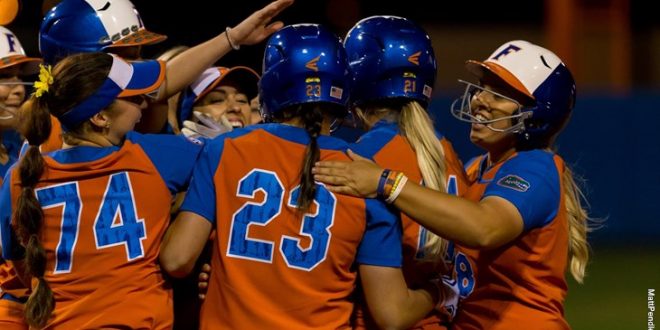 No. 5 Gators Complete Sweep of No. 19 Bulldogs in Doubleheader

The fifth-ranked Gator softball completed the series sweep against the 19th ranked Mississippi State Bulldogs after winning both games (6-2, 3-0) in a doubleheader Saturday. Florida (41-7, 15-3 SEC) has now swept four SEC series so far this season. The Gators are now 36-19 all-time against the Bulldogs.

Heroics from left fielder Amanda Lorenz and junior pitcher Kelly Barnhill made the difference at Nusz Park. Lorenz hit a grand slam in the first game and Barnhill (21-1) shut out the Bulldogs in the second contest. Lorenz has reached base safely in every game this season.

Florida left 10 batters on base and made two errors in the game, but still managed to get the win.

Catcher Janell Wheaton gave Florida a 1-0 lead with her third home run of the season in the second inning. Shortstop Reggie Harrison singled to give the Bulldogs their first hit of the game, but Gator starting pitcher Aleshia Ocasio claimed her third and fourth strikeout to maintain the lead.

Mississippi State later tied the game at 1-1 with successive hits and an intentional walk before Sarai Niu scored Bevia Robinson with an infield ground out to first base. Ocasio got out of the third inning with a pop out from Harrison to Hannah Adams at second base.

Amanda Lorenz, who nearly hit for the cycle in the 8-3 win Friday, helped put the game away for Florida with a grand slam in the fourth inning after Jordan Matthews reached via error and singles by Alex Voss and Adams loaded the bases. Lorenz continued to be influential after she singled and eventually scored from a Nicole DeWitt double in the sixth inning.

A Niu groundout to second resulted in her second RBI to make the game 6-2, but the Bulldogs could not complete a seventh-inning comeback. Both teams finished with eight hits. Ocasio gets the win after throwing 104 pitches in seven innings with seven strikeouts.

Unlike the first game, the second game was a pitcher’s duel by Barnhill and Bulldogs starter Holly Ward. Both Barnhill and Ward finished with five strikeouts. Mississippi State was plagued by errors. Despite Ward giving up only two hits to Barnhill’s three, a failed pick off attempt by catcher Mia Davidson allowed Sophia Reynoso to score from third to give the Gators a 1-0 lead. Reynoso was walked and advanced to third after consecutive ground outs.

In the seventh inning, Ocasio reached base because of a fielding error by second baseman Emily Heimberger. Right fielder Jaimie Hoover would make the Bulldogs pay with a double to right field. Hoover was able to advance to third when the Bulldogs attempted to stop Ocasio from scoring on the throw home. Wheaton flied out to center field to score Hoover. Barnhill would give up a single to Harrison in the bottom of the seventh but would close out the game with 98 pitches and the Gators 26th shutout of the season.

“The important part is that we have the ability to sweep a really good team on the road during a huge weekend for them that had record attendance, with great atmosphere and energy. I was proud of our players for being able to really show their toughness and wow, what a big hit Jaimie Hoover had there at the end.”

The Gators return home to Katie Seashole Pressly Stadium to take on 10th ranked Florida State on Wednesday. Florida lost their previous meeting this season 4-1 in Tallahassee. The Gators are 24-16 all-time against the Seminoles and are 12-7 at home.