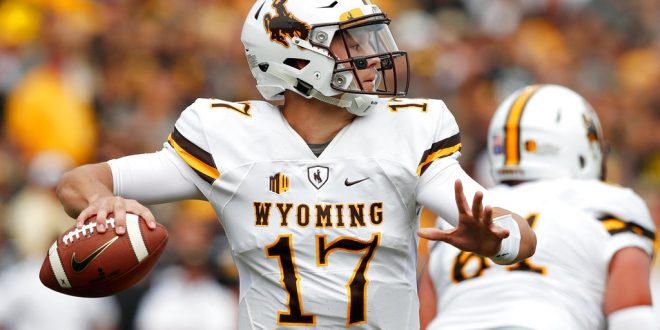 FILE - In this Sept. 2, 2017, file photo, Wyoming quarterback Josh Allen throws a pass during the first half of an NCAA college football game against Iowa, in Iowa City, Iowa. Four quarterbacks are certain to go in the first round of the NFL draft. (AP Photo/Charlie Neibergall, File)

Can Josh Allen Back Up his No .1 Potential

Josh Allen is one of several top quarterback prospects going into the upcoming NFL draft who could be taken No.1.

Josh Allen who grew up in Firebaugh, California a small town with a population of 8,000. Many believe Allen doesn’t have what it takes to be a good quarterback in the NFL. Coming up in high school Allen was not a well-known recruit and never had the option of picking colleges to attend or having a big signing day. Growing up he knew that he wanted to play football and attend Fresno State. He was a die-hard fan of the team, growing up he attend their home games regularly.

Shortly after getting shot down from his dream school.,Allen ended up going the junior college route to keep his dream alive. Here are Allens starting career completions listed up until the end of his college career.

Josh Allen first played for Reedley community college, in his hometown in California before eventually getting an offer from Wyoming. During his freshman year at Reedley, he had an impressive performance completing 25 touchdowns and four interceptions for the season.

Leading up to the end of his season he was not satisfied. He did not get any offers from any Divison 1 schools he was overlooked and took matters into his own hands. Emailing numerous coaches he only got a response from, Wyoming University.

“I think he is the best Quarterback in the draft and I don’t hesitate at all.”@PhilSimmsQB with high praise for Josh Allen. pic.twitter.com/hj2IR3owwe

Allen is being highly talked about as the draft draws closer, despite being under the radar for most of the college football season. Now, experts have him potentially going number one to the Cleveland Browns, over players from more well-known schools like Baker Mayfield, Sam Darnold and Lamar Jackson. Allen had an impressive combine, running the 40-yard dash faster than any of those previously mentioned quarterbacks.  Many NFL fans think he could come up has one of the biggest busts in recent NFL history, but only time will tell. Allen, who is  6-5 230 pounds, threw  44 touchdowns in his Wyoming career. One of the biggest criticisms that fans and scouts share are concerns about his accuracy. In a recent interview, Allen spoke highly about his ability on the field despite the negativity surrounding him in the days leading up to the draft.

“Going back to college having a 56% completion obviously it not great but i think its a little blown out of proportion and do think that I am accurate and getting my feet right,” Allen said.

Does Josh Allen have the ability to be the best quarterback and go potentially number one coming out the draft? We’ll find out Thursday night as the 2018 draft begins.

Previous Townsend Gearing Up for NFL Draft
Next No. 1 Florida Baseball Drops Midweek Match Up to Mercer