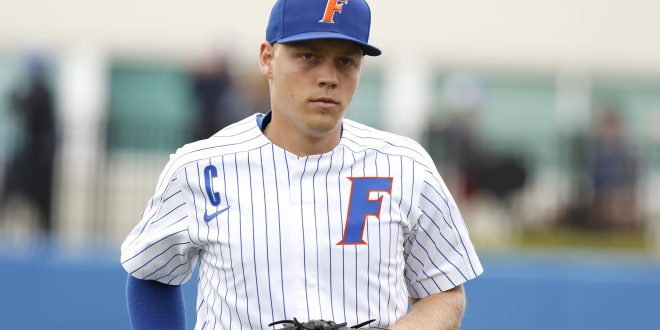 No. 1 Florida Baseball Drops Midweek Match Up to Mercer

The Florida Gator baseball team (34-9) fell Tuesday night to Mercer (29-14) by a score of 6-4 in Gainesville. The defeat is Florida’s second straight after losing the final game of the series to Kentucky last weekend.  Florida is now 30-29 all-time against the Bears including a 0-2 mark under current head coach Kevin O’Sullivan.

Offense reigned early as the Bears got on the board first in the opening frame. Gator freshman starting pitcher Hunter McMullen, who would last only 2.1 innings, walked home a run to give Mercer a 1-0 advantage.

The Gators responded quickly in the bottom of the inning. Wil Dalton hit a two-run home run that received some help from the wind to get over the fence in left field. The home run was his 16th of the season which leads the SEC.

A two-out single from JJ Schwarz and an Austin Langworthy walk kept the rally alive. Blake Reese singled to left center to score Schwarz. Langworthy, who advanced to third on the Reese single, scored during the next at-bat on a wild pitch to give the Gators a 4-1 advantage.

After a quiet second, freshman RJ Yeager led off the top of the third with a home run to left field cutting the deficit to 4-2. Mercer then tied the game at 4-4 later in the inning when a double off the bat of freshman Le Bassett scored seniors JT Thomas and Jackson Ware.

Florida lefty Andrew Baker entered the game in the fourth after freshman Connor Churchill gave up a single, committed a throwing error and then gave up another single to put runners on the corners. The Bears grabbed the lead when a squeeze bunt from Yeager scored sophomore Kyle Dockus.

Yeager would wind up being one of 12 straight Mercer hitters retired by Baker. The four innings he pitched is a season-high, and Tuesday night marked the sixth straight appearance in which Baker has not surrendered a run. The outing drops Baker’s ERA this season to 1.86. Last year it was 8.03. Baker credits the turnaround to better composure.

“Last year, as you can see, when I pitched I used to get hyped for every single out,” he said. “This year I try to keep a level head until the inning is over.”

Mercer’s bullpen was lights out following a rough outing from starter Zach Graveno. He exited after one inning of work. Sophomore Sawyer Gipson-Long took over and pitched a scoreless second and third.

While Gipson-Long was impressive, the story of the game was the stellar effort put forth by Robert Broom. The junior had Gator hitters guessing all night long. He struck out 12 and walked only one over six innings of relief work. Collectively, the Bears struck out Florida 14 times. Mercer pitching leads the NCAA in strikeouts this season.

Dalton, who struck out twice against Broom, thinks Broom did a nice job of mixing pitches.

JJ Schwarz, who managed to walk and single against Broom, believes the different arm angle was a factor in the team’s struggles at the plate.

“We just didn’t make any adjustments,” he said. “He was pitching us the same way for six innings.”

O’Sullivan called the loss “disappointing” and, like Schwarz, said the team needs to do a better job of making mid-game adjustments.

Tyler Dyson took over in relief for Baker and worked an inning. He gave up a run and has now given up 18 earned runs in his last 24 innings pitched. After the game, O’Sullivan said freshman Jack Leftwich will get the start this weekend on Saturday in place of Dyson. He added that he expects to see Dyson starting again on the weekends and that he’s being moved to the bullpen for now in an effort to boost his confidence.

Up next, Florida will host Auburn in a three-game series beginning on Thursday.

We're back on Thursday for a big three-game series against No. 22 Auburn. pic.twitter.com/G95yCdMhFm

I'm an above-average golfer with surprisingly great touch around the greens. Click on my twitter link for some sports talk.
@Ry_McGinn
Previous Can Josh Allen Back Up his No .1 Potential
Next Former Wide Receiver, Antonio Callaway Fails Drug Test at NFL Combine