Home / NFL / Grateful to be an Eagle: Nick Foles is staying in Philly 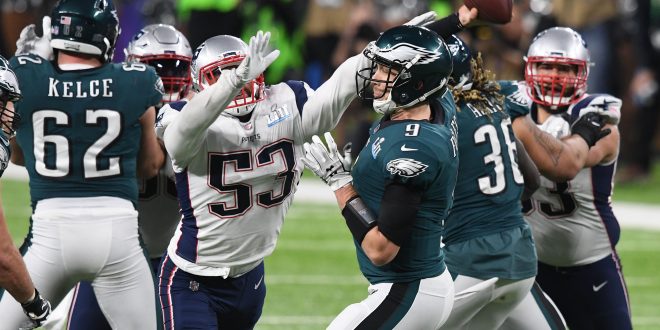 Grateful to be an Eagle: Nick Foles is staying in Philly

The Patriots (15-4) seemed ready to take their sixth championship with Brady and coach Bill Belichick in eight Super Bowls. Brady threw for a postseason record 505 yards and three TDs.

Coming in as the underdogs (+5.5), the Eagles were without their rookie star quarterback Carson Wentz.

The Eagles and Patriots combined for 1,151 yards of offense, which is the most in any NFL game EVER. pic.twitter.com/xpdDrd7HYO

Arguably one of the most exciting Super Bowl in decades, the Eagles and Patriots combined for 74 points.

The Eagles were eventually able to pull out the win and hoist their first Lombardi trophy in team history.

The #Eagles have reworked QB Nick Foles contract. It includes a $2M signing bonus, and there is an option for the 2019 season if both sides want to continue the relationship.

“It’s really a good good contract. It benefits me it also benifts the team as well.” Foles said in an interview with the media.

The Eagles took care of restructuring Foles’ contract this past weekend giving him the starting money he deserves.

Per Garafolo, the Eagles can pick up Foles’ 2019 salary, $20 million. Foles can buy his way to free agency by giving back the $2 million signing bonus he signed in the reworked deal prior to free agency and can make up to $14 million in incentives if he becomes the starter and hits certain on-field benchmarks in 2018.

Foles seems content in his position with the Eagles and looks forward to another season with the team.

Previous Cowboys Move On From Dez Bryant
Next No. 5 Florida Defeats No. 8 Florida State in Midweek Pitching Battle

After undergoing neck surgery, Los Angeles Charger Mike Pouncey is cleared for football. While the …