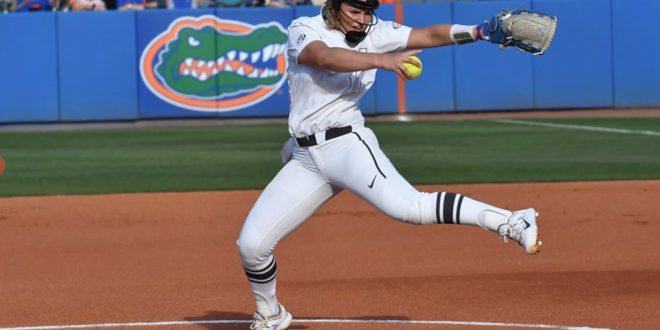 No. 5 Florida Defeats No. 8 Florida State in Midweek Pitching Battle

The fifth-ranked Gators softball team defeated the No. 8 Florida State Seminoles 5-1 at home Wednesday. In a pitching battle, Florida pitcher Kelly Barnhill (22-1) edged FSU pitcher Meghan King (14-6) with 10 strikeouts in 98 pitches. Amanda Lorenz is celebrating her 21st birthday with a win after scoring off Nicole DeWitt’s RBI double. The Gators outhit the Seminoles 8-2 overall after hitting five hits in the sixth inning.

Up until the bottom of the sixth inning, Barnhill and King were both dominating in the circle. The left-handers went back-and-forth from the circle, forcing each other to prove who can collect more outs. An uncharacteristic error by Barnhill in the second and a combination of hits and walks by King did not add up to runs. If a batter reached base, Barnhill and King would throw strikeouts or force pop-ups and groundouts to end the inning.

With the loud support of the crowd, the Gators capitalized in the bottom of the sixth inning. The SEC Player of the Week and birthday girl Lorenz gave Florida hope with her second single up the middle to leadoff. Baserunning was a key factor for the Lorenz, who advanced to second when King threw a wild pitch. On the sixth pitch of the at-bat, DeWitt drove in Lorenz when center fielder Morgan Klaevemann couldn’t make a diving catch. DeWitt’s 44th RBI ties her with Lorenz for the most this season.

Kvistad was walked and Ocasio questionably beat a throw to first for a bunt-single. Wheaton squeezed a single a little harder than a bunt past third baseman Jessie Warren and shortstop Cali Harrod with bases loaded to score DeWitt. King would only get one out before being replaced right-hander Cassidy Davis.

Sophia Reynoso doubled down the left field line and advanced to third, strengthening the lead to 5-0. Florida State would get out of the inning with pinch-hitter Jaimie Hoover striking out and a groundout for Hannah Adams.

Warren gave the Seminoles life with a first-pitch home run to center field. Warren had both hits of the game for the Seminoles. Barnhill pulled through once again with three consecutive strikeouts to end the game.

With the SEC Tournament approaching, Tim Walton was proud of Barnhill’s ability to bounce back from her mistakes.

“This is a signature win for Kelly, not only did she make one mistake in the game, she made two and was still able to bounce back. She was who she is and I am proud of her for performing at a high level and not trying to do too much,” Walton said.

Head Coach Tim Walton was recognized pregame for achieving his 800th career win and 700th as the head coach of the Florida Gators.

Barnhill says she just focused on her next pitch after her error.

Barnhill and Lorenz are both top 25 finalists for the 2018 USA Softball Collegiate Player of the Year. Adding to the celebration, Lorenz celebrates her 21st birthday with a win and a story about the pie Barnhill baked for her. Although the left fielder thinks she’s a great baker, she believes she’s a better pitcher. With her mother in town, Lorenz says she is going to get dinner with her and her roommates and then rest for the weekend series.

The Florida Gators return to conference play when they host the No. 13 Lousiana State Tigers in a three-game series starting Friday at 5:30 p.m. Florida is 28-32 all-time and 11-12 at home against the Tigers. The Gators have won the last five games including two wins at the College World Series and a three-game sweep on the road.

Sports Journalist @ESPNGainesville, @VAVEL, @VAVEL_USA, @WUFTNews. Telecom at @UF. Miami Aficionado. Views are my own. RT's ≠ endorsements.
Previous Grateful to be an Eagle: Nick Foles is staying in Philly
Next The New York Jets Could Move Up in 2018 NFL Draft