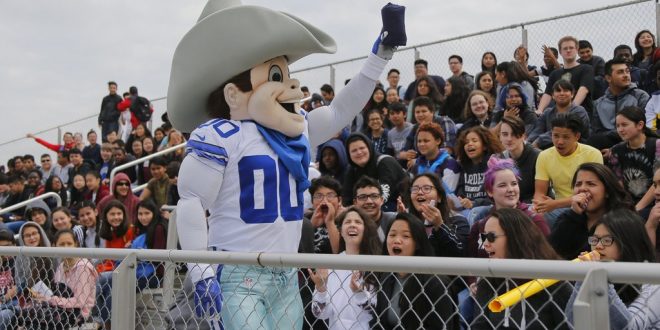 MANDATORY CREDIT; FORT WORTH WEEKLY OUT; 360 WEST OUT

Tonight, the lives of 32 football players will change forever as the first round of the NFL Draft kicks off. Here are some quick questions, as well as facts and figures, heading into tonight.

Well, that depends on who you ask. Unless the Cleveland Browns make an early get for RB Saquon Barkley, the top pick is likely to be a quarterback. Not that that lessens the suspense.

The 2018 QB class is one of the deepest in history. And the Browns are not doing anything to help the inquiring minds of the public. The team hosted Sam Darnold (USC), Josh Rosen (UCLA), Baker Mayfield (Oklahoma), Josh Allen (Wyoming), and Lamar Jackson (Louisville).

The least likely to go from that bunch might be Rosen. In December, he said he would rather be a lower pick with “the right team.” But, he still wants to prove that he belongs in the league.

How Many Quarterbacks Will Go?

But, how many could hear their names tonight? Besides the five that made the trip to Cleveland, Oklahoma State’s Mason Rudolph is also getting plenty of first-round buzz. So, if six quarterbacks hold up jerseys tonight, 2018 will tie 1983 for the most drafted in the first round. Keep in mind, two Heisman Winners (Mayfield and Jackson) are ready for the pros.

Each of the six quarterbacks that could potentially go tonight has a keyword to look out for. Commentators will likely discuss the “potential” of Sam Darnold. For Josh Rosen, the word “polished” comes to mind. Baker Mayfield is “tenacious.” Josh Allen has impressive “accuracy.” Lamar Jackson always gets praise for his “athleticism.” And Mason Rudolph fits the “prototype” of an NFL quarterback.

Will Any Gators Go Tonight?

Last year, eight Gators went to the league. But, only Jarrad Davis was a first-round pick.

Tonight, former Gators DT Taven Bryan is looking like a low first-rounder. At the NFL Combine, the former redshirt junior was 6’5″ and 291 lbs. He ran the 40-yard Dash in under five seconds, got 30 reps on the bench press, and jumped a 35-inch vertical.

Who Will Be Heading to a Florida Team?

The Tampa Bay Buccaneers pick seventh overall. After having the lowest-ranked defense in the league, look for the Bucs to take someone on “D” in the NFL Draft. Best bets: Derwin James (S), Minkah Fitzpatrick (DB), Quentin Nelson (OG)

The Miami Dolphins pick eleventh. The Fins need consistent QB play if they want to make a playoff any time soon. Jay Cutler is old at 34 and Ryan Tannehill still is not where he should be. Best Bets: Any of the remaining “Big 5”

If you were lucky enough to snag tickets, have fun at the Cowboys’ AT&T Stadium in Arlington, Texas. If you are looking to watch from the comfort of your couch, tune into NFL Network, ESPN, ESPN2, or ESPN Deportes. The Draft starts at 8 PM.

Previous The New York Jets Could Move Up in 2018 NFL Draft
Next NBA Playoffs: Game 5 Highs and Lows

As college football heads toward conference championship weekend, the playoff committee made some changes in …