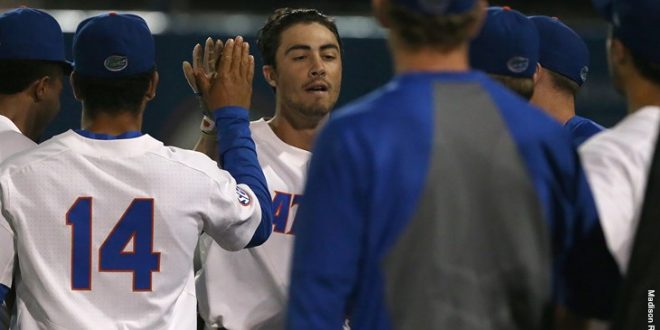 Gator Baseball Takes Down Mize and the No. 22 Auburn Tigers

It was billed as a classic pitcher’s duel for the SEC and college baseball at McKethan Stadium as 61 pro scouts were on hand to watch potential first round picks Brady Singer of Florida and Casey Mize of Auburn battle it out on the mound.  In the end, Gator third baseman Jonathan India hit a two-run homer to give the Gators they would never lose on their way to a 3-1 victory over the Auburn Tigers Thursday night in Gainesville.

The pitching match up lived up to is billing.  Brady Singer and Mize combined to toss 14 innings and they registered 18 strikeouts. Singer finished the night allowing just one run on four hits and eight strikeouts in his seven innings pitched. Meanwhile, Mize also went seven innings and surrendered three runs on three hits while fanning 10.

Singer improved his season record to 9-1 and lowered his ERA to 2.62.

Singer says both starters shined on the big stage and showed what they could do.

Brady Singer has gone at least 7.0 innings in 8 of his 11 starts this year. #MLBDraft

With the win tonight, he's now tied for the national lead with 9 wins on the year. #Gators pic.twitter.com/J6dYbnUysj

Going into this anticipated pitching duel, runs were expected to be hard to come by. So when India launched his home run over the left field wall to give the Gators a 2-0 lead in the first inning, it felt like that might just be enough to take down the Tigers.

Gator coach Kevin O’Sullivan says he was very pleased with the way India handled himself at the plate.

In the top of the fourth inning, Auburn fought back. They pieced together a single to right center field, a hit by pitch, a sacrifice bunt, and an RBI groundout to push a run across the board and decrease the deficit to one.

But the Gators responded accordingly in the bottom half of the frame. India started a rally by getting hit in the head with a pitch. Later in the inning, Austin Langworthy sent a line drive to left that went off the glove of Auburn’s third baseman. Brady Smith followed with an RBI ground ball single through the left side to extend the Gators’ lead to 3-1.