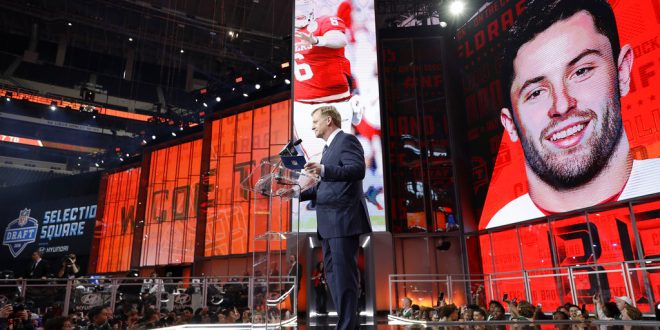 Commissioner Roger Goodell speaks at the podium after the Cleveland Browns selected Oklahoma's Baker Mayfield as their pick during the first round of the NFL football draft, Thursday, April 26, 2018, in Arlington, Texas. (AP Photo/David J. Phillip)

NFL Draft Recap: Winners and Losers in a Wild First Round

In arguably the most anticipated NFL Draft in recent years, the draft was a whirlwind of unexpected picks Thursday night. From Heisman winner to Heisman winner, 32 players walked across the stage at AT&T Stadium in Arlington, Texas.

The Cleveland Browns surprised the masses by picking Oklahoma quarterback Baker Mayfield and the Baltimore Ravens traded for the last pick to grab Lamar Jackson before the New York Giants could in the second round. Quarterbacks Sam Darnold, Josh Allen and Josh Rosen were all drafted in the top 10.

The Browns surprised all by taking Baker Mayfield with the first pick. Mayfield, the reigning Heisman winner, led FBS with a 70.5 completion percentage in 2017, and he set a single-season record by averaging 11.5 yards per attempt. However, he was theorized to fall behind Darnold and Allen because of his small stature at 6’1″ and past on and off the field issues.

He’s risky because of his size compared to most quarterbacks in the league but can morph into franchise players like Drew Brees and Russell Wilson if everything works out. Cleveland also surprised everyone drafting cornerback Denzel Ward over defensive end Bradley Chubb with the fourth pick. Ward will help the defense, but would he impact the team more than Chubb?

Although the Giants are in need of a quarterback with 37-year-old Eli Manning still the starter, they decided to jump on Penn State running back Saquon Barkley. The position is also a need for the team, but with a lot of talent at running back at the draft, it could be difficult for fans to see them pass on Darnold, Allen and Rosen.

The New York Jets had a dream scenario with the team also in need of a franchise quarterback. Taking the safe pick, Darnold could start ahead of Josh McCown next season. Darnold threw 26 touchdowns but also had 22 turnovers in his last season at Southern Cal. His arm, size and footwork are all pro-level.

A series of wins in the draft came in the last six picks of the top 10. The Denver Broncos got to jump on Bradley Chubb to put next to Von Miller on the defensive line. The Indianapolis Colts got Notre Dame guard Quenton Nelson to help protect Andrew Luck in his returning season. The Buffalo Bills had a busy first round, trading up to the seventh pick from the Tampa Bay Buccaneers. The Bills selected Josh Allen to fill the quarterback need before the Arizona Cardinals or Miami Dolphins could select him.

Georgia linebacker Roquan Smith was drafted by the Chicago Bears to be a defensive playmaker. As the best linebacker in the class, he could rack up tackles in the middle from day one. The San Francisco 49ers found themselves a tackle who could replace Joe Staley in the future and protect quarterback Jimmy Garoppolo in Notre Dame tackle Mike McGlinchey.

Josh Rosen was the final of the highlighted quarterbacks to be drafted. The Arizona Cardinals moved five picks up, similarly to the Buffalo Bills, to draft Rosen before the Miami Dolphins could possibly draft him. Rosen was upset about falling so far in the draft.

Miami selected cornerback Minkah Fitzpatrick from Alabama. He can play safety and was picked as the best available player for a team who’ll stick with quarterback Ryan Tannehill next season. The Bucs and Washington Redskins both drafted defensive tackles in Vita Vea and Da’Ron Payne. Both of them will give their team help up front.

The New Orleans Saints gambled on defensive end Marcus Davenport from the University of Texas-San Antonio by trading two first-rounders. The Saints are confident they will get production from him with how much they gave up.

The Oakland Raiders decided to draft tackle Kolton Miller despite known defensive needs. The Bills traded up again to get linebacker Tremaine Edmunds whose potential could make him a great player in the middle of the defense. The San Diego Chargers arguably got the steal of the draft with safety Derwin James falling to them at 17. The Florida State safety can tackle, blitz and and catch well to go along with speed.

The Green Bay Packers traded up to get cornerback Jaire Alexander. A flashy player to help the Packers defensive needs. The Dallas Cowboys fans looked disappointed when outside linebacker Leighton Vander Esch was selected, but he is an athletic stud who can make a big impact. The Detroit Lions settled with top-center Frank Ragnow who will help protect Matthew Stafford inside.

21-32: Fitting Needs and One Major Gamble

Center Billy Price heads to the Cincinnati Bengals despite a pec injury at the combine. He’s not so great as a pass-blocker and isn’t very fast laterally, but is experienced.

The Tennessee Titans, New England Patriots, Carolina Panthers, Atlanta Falcons and Ravens all found necessary players for positions and player traits they’re lacking. Rashaan Evans will land tackles for the Titans, Isaiah Wynn can play tackle for the Patriots, D.J. Moore adds speed outside for Cam Newton, speedy receiver Calvin Ridley will lineup with fellow Alabama alumni Julio Jones in Atlanta, and the Ravens get the best tight end in Hayden Hurst to fill that void in their lineup.

The Seattle Seahawks made headlines drafting running back Rashaad Penny. Penny is considered to be worse than multiple backs who haven’t been picked and Seattle had many issues they could have addressed but didn’t. Edmunds brother Terrell Edmunds climbs late to be drafted by the Pittsburgh Steelers who are in need of a safety.

Florida defensive tackle Taven Bryan heads to the Jacksonville Jaguars and cornerback Mike Hughes is now a Minnesota Viking. Both at depth to two defensively talented teams. The Patriots drafted another Georgia player in running back Sony Michel. Michel will help out Tom Brady on offense. The Ravens drafted Lamar Jackson who will develop behind Joe Flacco and Robert Griffin III in Baltimore.

Sports Journalist @ESPNGainesville, @VAVEL, @VAVEL_USA, @WUFTNews. Telecom at @UF. Miami Aficionado. Views are my own. RT's ≠ endorsements.
Previous Gator Baseball Takes Down Mize and the No. 22 Auburn Tigers
Next Defense the Focus for Florida Teams in NFL Draft 1st Round