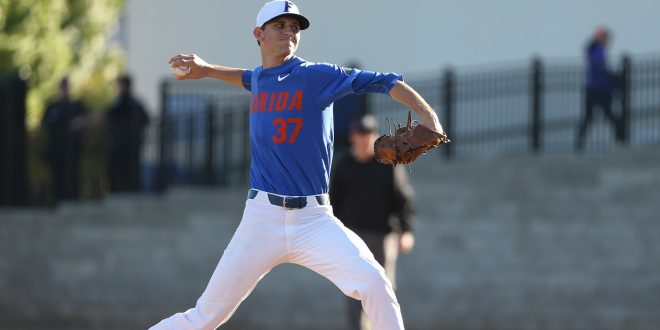 No. 22 Auburn Beats No. 1 Florida to Tie Series

The Florida Gator baseball team was defeated by the Auburn Tigers 11-5 Friday night. During Friday’s game, Auburn was consistent throughout. The Tigers had 15 hits to go along with their 11 runs while the Gators had nine hits to go along with their five runs.  Florida now has a 35-10 overall record and a 15-5 mark in conference play while Auburn is 31-13 overall and 10-10 in the SEC.  Before the game, the 1998 Gator team that went to the College World Series was honored with many of the team in attendance, including coach Andy Lopez and players Brad Wilkerson, Josh Fogg and David Ross.

Problems on the Mound

The Gator starting pitcher in this game, righty Jackson Kowar took the loss after being hit uncharacteristically hard as he gave up seven runs while walking two and striking out four. Kowar was eventually relieved by lefty Andrew Baker in the fifth inning; it was Kowar’s shortest outing of the year.

After the game, Gator coach Kevin O’Sullivan said how it was tough for Kowar to come back after getting off to a rough start and throwing so many pitches in the first inning.

Baker pitched 1.2 innings and gave up two runs, walking one and striking out two.  He was then relieved by righty Tommy Mace, who had very similar statistics as he pitched three innings, giving up two runs as well.

Mace looks really sharp out of the pen, but #Gators need some offense.

Due up: Schwarz, Langworthy, Bell

O’Sullivan also mentioned that on the mound the starting pitchers need to become more consistent as the regular season wides down.

Auburn offensively started off strong and kept the momentum going. In the top of the first, Steven Williams singled to right field and Brett Wright singled down the left field line that advanced Williams to third. With runners on the corners, Edouard Julien hit a homer to left center that put the Tigers on the board 3-0.

The Gators finally answered with back to back home runs in the bottom of the third from Nick Horvath and Deacon Liput; it’s the second time this season Florida hit back to back long balls.  The first time was back on February 28th when JJ Schwarz and Johnathan India both went yard against UNF.

Through the fourth, fifth and sixth innings, the Tigers scored two runs in each frame.

The Gators tried to make things interesting and in the bottom of the sixth.  JJ Schwarz hit a double to right field and Austin Langworthy singled through to the left side and Schwarz advanced to third. Suddenly, a wild pitch to Blake Reese caused Schwarz to score and Langworthy to advance to second. Reese was eventually walked. Then Horvath hit an RBI double that scored Langworthy and Reese. The score was then 9-5 Auburn.

In the top of the ninth though, Auburn pushed across two insurance runs to make the final score 11-5.

Both teams will be fighting for the series win Saturday as the Gators host the Auburn Tigers at 2 p.m. You can watch on SEC Network+ or listen to ESPN Gainesville 98.1 FM.