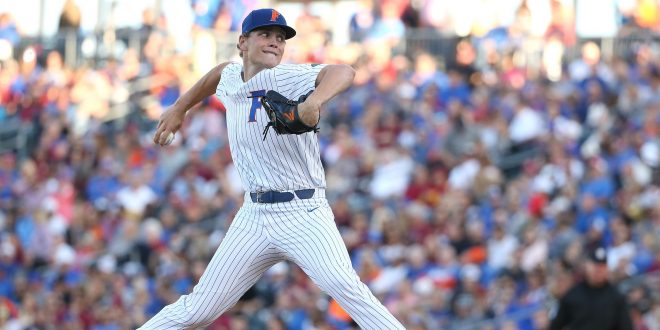 The Florida Gators (36-10, 16-5) picked up their seventh consecutive SEC series win via a 12-3 victory over the Auburn Tigers (31-14, 10-11) on Saturday. Offensively, Florida received hits from 10 different players. On the mound in his first SEC start, freshman Jack Leftwich was able to right the ship after a sub-par first inning. The home win improves the team’s record at McKethan Stadium to 25-5.

The Gators hit leadoff singles in both the second and third inning. However, both opportunities were squandered via double plays. In the second, a JJ Schwarz single to left center was erased when Austin Langworthy grounded into a 6-4-3 double play. In the third, Brady Smith singled to left field but was retired as part of a 5-4-3 double play off the bat of Blake Reese.

Florida’s leadoff hitter again reached base in the fourth when Jonathan India walked. This time the Gators offense took advantage and caught fire.

India scored the first Florida run of the day when Schwarz singled and Auburn’s right fielder, Steven Williams, committed an error. Wil Dalton, who had previously singled, advanced to third on the play. After a Langworthy walk loaded the bases, Nick Horvath cleared the bases with a three-RBI double into the gap in left-center to give Florida a 4-3 lead.

Horvath tagged up and advanced to third on a Smith flyout to left center. Reese then drew a one-out walk giving the Gators runners at the corners with one out. Deacon Liput then extended the lead with an RBI single to left field that scored Horvath.

Reese would go on to score in the next at-bat when Nelson Maldonado capped the scoring with an RBI single through the right side to make the score 6-3. Florida would go on to leave the bases loaded, but the six-run fourth marks the 16th time this season the Gators have scored five plus runs in an inning.

After the game, Liput described the rally as contagious and said it helps the team build confidence as a unit when the lineup is producing top to bottom.

Florida grabbed a couple of insurance runs in the later innings. In the fifth, a Reese RBI single scored Smith to make it 7-3. In the sixth, Langworthy hit an RBI single to left field that plated India. That extended the Gator lead to 8-3.

Liput hit a two-run home run over the scoreboard in right field in the seventh. The home run, Liput’s fifth of the season, put Florida up 10-3. Langworthy hit a sacrifice fly in the eighth that scored Andrew Baker making it 11-3. Keenan Bell then finished the scoring in the same inning with an RBI single that plated Shane Shifflett.

Leftwich settled down after the shaky start. He pitched 6.2 innings and at one point retired 10 Auburn hitters in a row.

With two outs in the seventh, Sully will get the ball from freshman Jack Leftwich who exits to a standing ovation!

The outing was his longest of the season and he recorded a season-high seven strikeouts while walking just one; his ERA is now 3.50 on the year. Leftwich said throwing all of his pitches for strikes and getting ahead of hitters was the key to his success.

After the game, head coach Kevin O’Sullivan seemed pleased with Leftwich’s outing, but he added that he wants the pitchers to improve collectively and not get complacent.

Jonathan India, who walked four times in his previous at-bats, was hit by a pitch in the eighth inning and was removed from the game. Afterward, O’Sullivan said India is fine and that pulling him was more of a precautionary move.

Tyler Dyson took over for Leftwich in the seventh inning and again struggled. He faced just two batters, hitting the first and then giving up a hit to the second, before exiting the game.

Jordan Butler worked out of the jam in the seventh. He and Michael Byrne combined to pitch a scoreless 2.1 innings to finish the game. The pair possess the lowest ERAs on the team. Butler’s ERA is now 2.43. Byrne’s is 1.53.

Up next, the Gators will travel to College Station to take on the No. 18 Texas A&M Aggies. Florida is 6-3 on the road in SEC play this year.

I'm an above-average golfer with surprisingly great touch around the greens. Click on my twitter link for some sports talk.
@Ry_McGinn
Previous No. 22 Auburn Beats No. 1 Florida to Tie Series
Next Gator Lacrosse Claims Big East Title With Win Over Butler