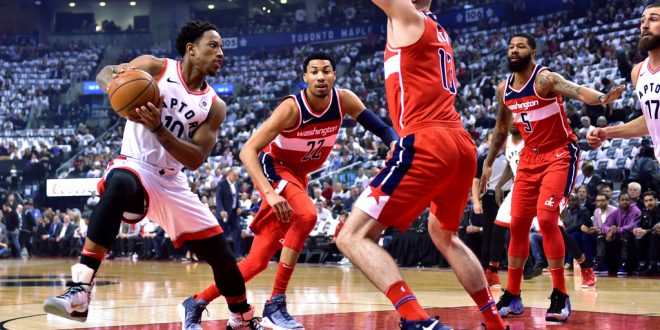 The NBA Playoffs can’t get any more exciting than this. Four first-round series have concluded and four remain. Three have the possibility of concluding or extending to a Game 7 tonight.

The Wild Wild Western Conference hasn’t been as competitive as many thought it would be. Only one series remains in the first round. And it may end tonight to complete the conference semi-finals bracket matchup. Unsung hero Donovan Mitchell and the Utah Jazz look to eliminate the reigning MVP Russell Westbrook and the Oklahoma City Thunder at Salt Lake City. Meanwhile, the easy Eastern Conference has three series patiently waiting for a true victor. Two of those series can also conclude tonight. Lebron James and the Cleveland Cavaliers look to eliminate the high hopes of possible Most Improved Player Victor Oladipo and the Indiana Pacers at Indiana. The other series being Demar DeRozan and the Toronto Raptors against John Wall and the Washington Wizards.

This series has been a surprise to all. The “Big Three” of the OKC Thunder, haven’t been up to par with their “Big Three” form so far in this series. Yet, in Game 5, Westbrook and Paul George decided to put the team on their backs and combined for 79 points of the Thunder’s 116 points. They avoided the embarrassment of being eliminated at home by overcoming a 25-point deficit in the 3rd quarter. Still down 3-2 in the series, they have another elimination game in tonight’s matchup.

As for the Jazz, Donovan Mitchell and Ricky Rubio have been dominating on all aspects of the floor. Potential Rookie of the Year Mitchell has averaged 26.6 points, 7.8 rebounds and 2.2 turnovers in his inaugural five playoff games this series. Ricky Rubio is averaging 16.8 points and 7.8 assists in this series. He even accomplished a triple-double in Game 3 while Westbrook guarded him.

The 25-point rally by the Thunder showed how they struggle in the opening minutes and can finish games if Paul George and Westbrook drop 30+ points each.

Jazz head coach Quinn Snyder expressed his thoughts on how easy it is to lose a 25-point lead in the NBA.

Rubio had a bad shooting night ending with only 10 points. If the Jazz can withhold the firepower of OKC’s two superstars and maintain the lead from the beginning to end, then this series will most likely end tonight.

The top-seeded Toronto Raptors are on a roller coaster ride against #8 seed Washington Wizards in the first round of the Eastern Conference Quarter-finals. On some days, the ECF leaders look unstoppable. For example: In their previous game, Demar DeRozan went off for 32 points; Jonas Valanciunas finished with 14 points and grabbed 13 rebounds; and Kyle Lowry had himself a night with 17 points and 10 assists to cap off the victory 108-98. They now lead the series 3-2 and will head to Washington.

DeMar DeRozan's numbers through five games in the #NBAPlayoffs for the @Raptors:

But the Wizards have thrived when playing in Washington. They’ve kept their home court advantage, using the nation’s capital as Kryptonite for the Raptors. In Games 3 and 4, the Wizards have outscored the Raptors 228-201 while in D.C. But a new narrative has been written for the Wizards. Small forward Otto Porter Jr. has been ruled out for the rest of the series. Porter underwent a procedure on Friday to remove a buildup of pressure around a contusion on his left leg. Kelly Oubre Jr, Markieff Morris and Tomas Satoransky will be receiving more playing time due to Porter’s injury.

Kyle Lowry with some thoughts after the game:

LeBron James has done it yet again. Nearly accomplishing the impossible to pull off a game-winner to secure a 3-2 series lead against Victor Oladipo and the infamous Indiana Pacers.

The Cavaliers head to Indiana and are hoping for another outrageous performance from James to seal the series. James supplied 44 points, 10 rebounds and eight assists, just shy of a triple-double to only win by three points. The problem is that James barely has any help to accompany him. His #2 guy on the team, the 5x All-Star Kevin Love only amounted to 11 points. James has a high possibility of doing what he just did again, and if he continues to carry this mediocre team all the way to the Finals and eventually wins? Then mark him down as one of the greatest to ever play the game.

The last loss came in Game 5 of the 2014 Eastern Conference Finals against the Pacers, which the Heat won in 6 games.

Pacers host the Cavaliers tonight at 8 ET on ESPN & the ESPN App. pic.twitter.com/JaI9I7mWMh

As for the Pacers, their chemistry is undeniably great. The surprise that Oladipo has given to the world is remarkable. Taking the reigns of a rebuilding Pacers organization and transforming them into a #5 seed team a year after they lose their best player (Paul George). Finishing with 12 points in the previous game, he realized how difficult it is when you try to do everything by yourself, shooting just 2-15 from the field. The contribution that Myles Turner, Lance Stephenson and Domantas Sabonis supplied helped the team stay afloat, even though they couldn’t take the W from the Cavs.

James is unstoppable when in series-closeout games, expect the Cavaliers to end this series tonight.

Recent grad from the University of Florida. Editing all articles on here while helping out the newbies. Love all things basketball.
@@MarcoJMartinez_
Previous NHL Preview: Lightning and Bruins set for colossal showdown
Next No. 22 Auburn Beats No. 1 Florida to Tie Series