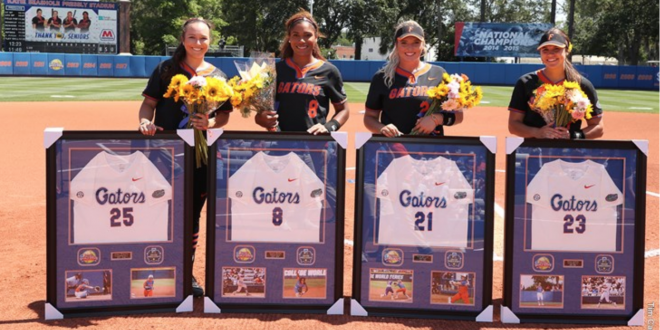 LSU pitchers Maribeth Gorsuch (7-2) and Allie Walljasper( save), each only had one strikeout as the Gators put the ball in play but had a hard time reaching base.  Gator coach Tim Walton credits the LSU pitchers for being unpredictable. Walton said Gorsuch changed speeds, locations and the height of her pitches.

Aleshia Ocasio (16-6) said she thinks she did a good job throwing different pitches, but she said ultimately “you can’t win a game with zero runs.” Ocasio struck out five Tigers, allowed seven hits and three runs.

Ocasio said they needed to get runs across when they were in scoring position but adds that she has room for improvement as well.

Ocasio said her mindset didn’t change after giving up the home run. “It happens,” Ocasio said. “But it’s my job to come back, throw a strike and get the next batter out so they don’t have the momentum going through the inning.”

Walton said Ocasio has been giving up a lot more hits.

Schlattman was responsible for all three runs. Later in the top of the seventh, Schlattman hit a single to bring in the third and final run. The RBI plated Shemiah Sanchez, and LSU lead 3-0.

It was the bottom of the seventh, two outs, the bases loaded and the Gators were at the top of their lineup. Freshman Hannah Adams was in the box. Gator fans hoped that her hit would be enough to put a run on the board for Florida, but a pop up to left center was caught and the game ended with left three Gators left on base.

But he said the goal still is to win the week.

The Gators and LSU will battle to win the SEC series in Game 3 Sunday at noon.

Kate Venezio is a fourth-year telecommunication-news student at the University of Florida. Kate does it all: Behind the camera she captures emotional moments as a photographer for the University of Florida Athletic Association. She's comfortable being in front of the camera, too. Kate interviews players, coaches, fans and family members for pre- and post-game coverage as a beat reporter for ESPN Gainesville/WRUF-FM. In addition, Kate produces the sports segment for the weekly WUFT News program. There, she's responsible for writing the script in its entirety to include production commands. The presentation includes video highlights and interviews taped and edited, and Kate then live anchors the final package on a daily deadline. In addition, she writes stories for wruf.com where she informs sports fans of local, state, and national trending topics. Kate also utilizes social media as a tool to help get the stories in front of viewers.
@@kate_venezio
Previous Gator Lacrosse Claims Big East Title With Win Over Butler
Next Historic 1998 Gator Baseball Team is Honored