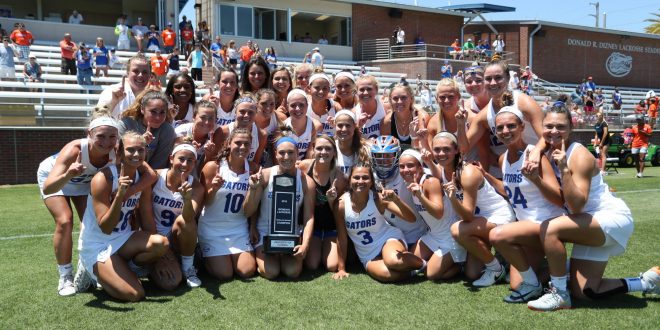 Saturday’s game against Butler was Senior Day, as well as the last regular game of the season. All the momentum in the first half was with Florida. The Gators finished the first 30 minutes with a 15-1 lead. Florida’s well-rounded offense saw 10 different players score.

Senior Shayna Pirreca earned a hat trick in the first half. Pirreca scored the 200th goal of her collegiate career, joining five other Gators in history.

The Bulldogs added to their score early in the second half but never got in a rhythm. The Gators had 17 different players score over the course of the game. Five Gators earned hat tricks, meaning they scored three goals in a game:

Florida is hosting the Big East tournament starting next week. The Gators will play in the semifinal round on Thursday at 4 p.m.

Born and raised at the ballpark! Typically quiet- until it comes to sports. I'm a South Florida native with a passion for baseball nearly as strong as my faith. Grew up in garnet + gold, turned out sporting orange + blue. Likely to be found with a camera. And yes, I take food pictures.
@victoriarossman
Previous No. 1 Florida Baseball Wins Seventh Consecutive SEC Series
Next No. 5 Gator Softball Falls to No.14 LSU