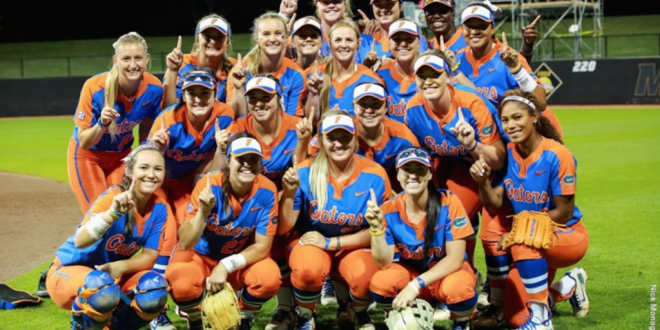 For the fourth year in a row, the Florida Gator softball team won the Southeastern Conference regular-season title. The fourth-ranked Gators defeated Mizzou, 4-2, Friday night at the Mizzou softball field.

This is the eighth overall regular-season league title for the program. The Gators are the second team in the SEC to win four consecutive regular-season titles. LSU was the first team to accomplish the feat with championships from 1999-2002.

In the game Friday the Gators wasted no time when it came to putting runs on the board. The first inning led off with back-to-back walks from Hannah Adams and Amanda Lorenz. Senior Kayli Kvistad’s single up the center brought the pair home to take the lead, 2-0. The team has scored in the first inning 31 times.

In the bottom of the second, Missouri’s Brooke Wilmes ripped a solo home run to bring the score to 2-1.

In the sixth inning, Kvistad produced her third RBI of the game when she brought the lead to 3-1 with a solo homer, her fourth of the season. Janell Wheaton also hit a solo home run in the same inning, extending the lead, 4-1. It was the eighth time this season that the Gators have hit two or more home runs in an inning.

Mizzou scored its second and final run after Cayla Kessinger blasted a solo home run off of Kelly Barnhill, in the bottom of the seventh. It was Kessinger’s 10th home run this season, bringing the final score to 4-2.

Barnhill (25-1) threw 97 pitches during the entire game, 76 of which were strikes. However, she struck out only four Tigers. Barnhill allowed four hits and two runs.

“I’ve had a lot of really, really good teams and good players, but to win a SEC regular season championship as a freshman, a sophomore, a junior and a senior, is very impressive. My hat is off to these four young women for just how hard they work, how hard they compete, how well they compete and how well they prepare to be champions. No one is ever going to be able to take that away from them and to be a four-time SEC champion is something very few people get to do. I’m happy that I’ve had the chance to coach these four seniors, they’ve really been the backbone of our success day in and day out.”

Check out the highlights from Game 1.

Florida also won the second game of the series and they will go for a series sweep in its final regular season game of the year on Sunday.

Kate Venezio is a fourth-year telecommunication-news student at the University of Florida. Kate does it all: Behind the camera she captures emotional moments as a photographer for the University of Florida Athletic Association. She's comfortable being in front of the camera, too. Kate interviews players, coaches, fans and family members for pre- and post-game coverage as a beat reporter for ESPN Gainesville/WRUF-FM. In addition, Kate produces the sports segment for the weekly WUFT News program. There, she's responsible for writing the script in its entirety to include production commands. The presentation includes video highlights and interviews taped and edited, and Kate then live anchors the final package on a daily deadline. In addition, she writes stories for wruf.com where she informs sports fans of local, state, and national trending topics. Kate also utilizes social media as a tool to help get the stories in front of viewers.
@@kate_venezio
Previous Singer Dominant In Gator Baseball Series Opening Win Versus Aggies
Next Kowar Sharp as No. 1 Gator Baseball Clinches Series Over No. 18 Aggies