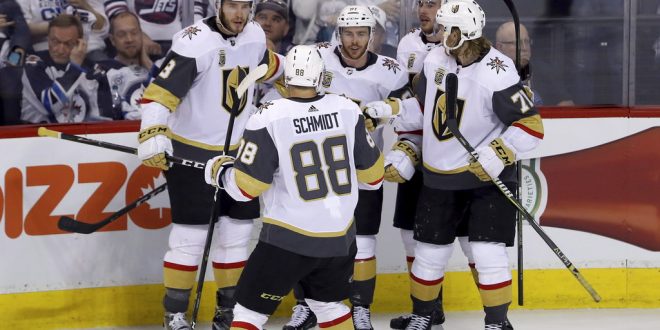 For the first time in it’s short franchise history, the Vegas Golden Knights found themselves trailing in a playoff series.

Vegas beat the Winnipeg Jets 3-1 to take Game 2 of the Western Conference Finals and tie up the series 1-1. Forward Jonathan Marchessault came up with two huge goals, including the dagger in the third period. Meanwhile, Marc-Andre Fleury was phenomenal again, making 30 saves on 31 shots. The victory flips the home ice advantage as the series heads to Las Vegas for games three and four.

“They know themselves,” Vegas head coach Gerard Gallant said. “So they weren’t good enough last game, and they knew that, and they had to respond tonight and they did in a big way.”

Vegas did just that, jumping out to a two-goal lead in the first period that kept the usually boisterous Winnipeg crowd out of the game for the majority of the time.

The Golden Knights first had to survive a couple of good chances for the Jets early on, including a back-hander from Nikolaj Ehlers that went off the post less than two minutes into the game.

Vegas got on the board just past halfway through the first. Tomas Tatar saw his initial shot from a narrow angle saved by Connor Hellebuyck. The puck bounced behind the goal and Tatar jammed it in from the side to give Vegas the 1-0 lead.

when you don't succeed at first try

Just four minutes later, the Vegas top unit combined for the second goal. Reilly Smith forced a turnover at center ice that slipped Marchessault through for 1-on-1 scoring chance, and he sent a nasty backhander through Hellebuyck’s legs to make it a two goal game.

Winnipeg made it interesting in the third period, pulling within a goal after Kyle Connor scored a power play goal seven minutes into the period.

Marchessault iced the game just 88 seconds later though. Again it was Reilly Smith with the feed, sliding a pass across the face of goal, and Marchessault again brought the puck onto his backhand before sending it past Hellebuyck’s stick side.

The two teams will meet again Wednesday night in Las Vegas for Game 3, with puck drop set for 9 p.m.