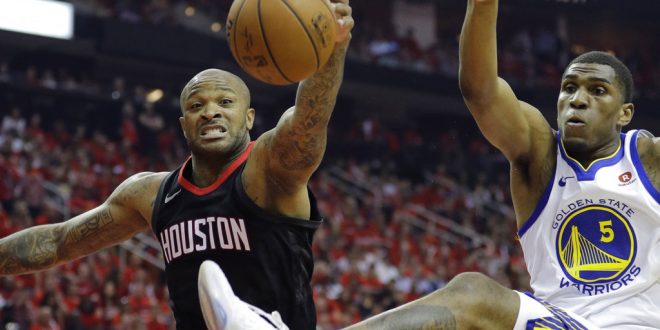 The Houston Rockets knew they had to make major adjustments heading into the second game of the Western Conference Finals.

Despite James Harden‘s 41-point heroic effort in the first game of the series, the Rockets lost by 13 points at home against the Golden State Warriors. Mike D’Antoni and Houston’s coaching staff realized that relying on Harden was not enough. The staff made it a point for Harden to spread the ball around in game two.

Gordon and Tucker Shoot Lights Out

The main beneficiaries of the Rockets spreading the ball around were Eric Gordon and P.J. Tucker. In game one, Gordon and Tucker were forced to stand outside of the three-point line as Chris Paul and Harden dribbled the air out of the ball. Gordon had 15 points, and Tucker nearly put up a goose egg as he finished with one point and only three shots from the field.

After getting stunned in game one, the Rockets decided to push the pace and get everyone involved the next game. Harden and Paul still had isolation plays, especially when Stephen Curry was guarding them, but the distribution of the basketball led to more open shots. As a result, Gordon made six out of his nine attempts from behind the arc, and Tucker was an efficient 83 percent from the three-point line on six shots.

Although the Rockets received 116 of 127 points from six players, the ball movement was a key aspect to Wednesday’s win. Tucker said that along with his team’s prolific performance on the offensive end, their focus on the other side of the court, which will be more important to their success.

Kevin Durant outscored the other four Warriors starters 38-35 in Game 2 vs the Rockets pic.twitter.com/zJCZUWAGRu

Golden State’s lineup of Curry, Andre Iguodala, Draymond Green, Kevin Durant and Klay Thompson is collectively known as the ‘Hamptons Five’. The origin of this nickname is too complex to explain, but this starting lineup is too lethal, according to many.

On Wednesday, however, only one of those players contributed anything meaningful offensively. Durant put up 38 points on 13-22 shooting. However, he only got 35 points from the rest of his starting lineup. The main reason for this poor outing by one of the most explosive offenses had to do with Houston’s intensity on defense, as Tucker pointed out.

The Rockets stole the ball eight times and forced 15 turnovers while securing 37 defensive rebounds. The team also closed out exceptionally well on Curry and Thompson when the Splash Brothers hoisted up three-pointers. Contested shots and more aggressive defense led to the Warriors’ fourth-worst postseason loss in the Steve Kerr era.

Game 2 was the 4th-worst playoff loss for the Warriors under Steve Kerr.

The good news? Entering today, Golden State won the next game after 4 of their 5 worst losses under Kerr pic.twitter.com/4OYjlIJ5V9

The Golden State Warriors still have home-court advantage going into game three of the Western Conference Finals. They will play the Rockets on Sunday at 8 p.m. EST in Oracle Arena in Oakland, California. Finally, for more on continuing NBA Playoff coverage, stay with ESPN 98.1 FM – 850 AM WRUF.