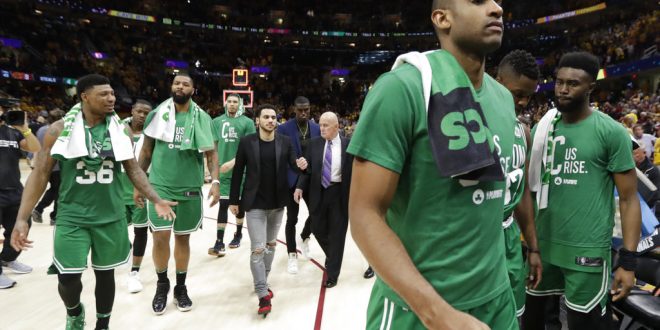 Boston Celtics' Al Horford walks off the court at the end of Game 3 of the team's NBA basketball Eastern Conference finals against the Cleveland Cavaliers, Saturday, May 19, 2018, in Cleveland. The Cavaliers won 116-86. (AP Photo/Tony Dejak)

The Boston Celtics host the Cleveland Cavaliers in Game 5 of the Eastern Conference Finals on Wednesday. The series is currently tied 2-2.

After a dominant first quarter that saw the Cavaliers go up 34-18, Boston was not able to come back even after outscoring the Cavaliers in the remaining quarters. LeBron James was the difference in the 111-102 final score scoring 44 points. The Cavaliers had complete control at the half scoring 34 points in both quarters, almost matching Boston’s 35 points in the second quarter. Boston played better defense in the second half, but the offense was not on point, shooting a 41 field goal percentage compared to Cleveland’s 50 percent.

The Cavaliers and LeBron James showed no mercy against the Celtics in both games at home and will carry that mindset to TD Garden this Wednesday.

Keys for the Celtics

Keys for the Cavaliers

Figuring out a plan to make it big in the soccer scene in the U.S. or anywhere else in the world. For now, I'm having a blast writing for ESPN Gainesville and learning a lot from managers and students around the workplace. I'm covering the TV beat for Gators Soccer. What a team! Follow me on twitter: @J_AguerrevereUF
@@J_AguerrevereUF
Previous Preview: No. 3 Florida Baseball Opens SEC Tournament Play Against LSU
Next Bolts, Caps meet with Stanley Cup appearance on the line